By Robin PogrebinComment:  I hope this foundation will fund tribal comic books. We need more of this vital art form. <g>

Below:  "Walter Echo-Hawk, chairman of a new cultural foundation." 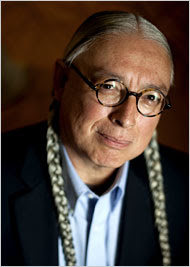 Let's hope they fund Native artists creativity rather than non-natives creativity on Natives.