Deadspin was the first to report perhaps the most interesting aspect of Sunday's Redskins game:

Many other news outlets picked up this curiosity and ran with it:

Snyder is currently in a legal battle with the U.S. Patent office which cancelled his trademark last June calling it 'disparaging to Native Americans'

Before Sunday's game against the Arizona Cardinals, about 100 gathered outside of University of Phoenix stadium to protest the Redskins team name

Shelly finished seventh in August's presidential primary elections, and will be vacating office in January

By Ashley CollmanNot just a mascot

But Shelly wasn't just slouching in his chair looking embarrassed to be a sellout:

By The Associated PressA Picture is Worth a Thousand Words: Navajo President Explains His Game Time Activities

A cartoon by Ricardo Caté of "Without Reservations":

And one by Jack Ahasteen, political cartoonist for the Navajo Times:

Critics also had a field day with the photos of Snyder and Shelly in the owner's box. My effort below was one of several: 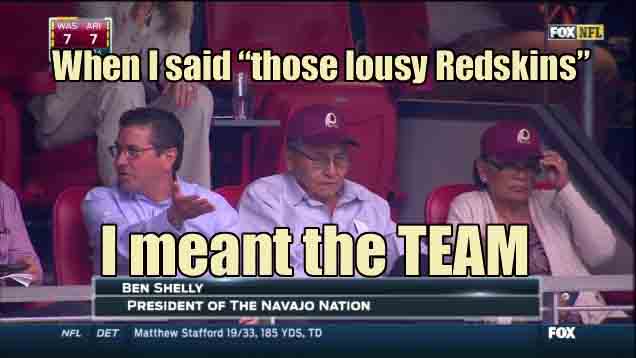 Comment:  For more on the subject, see Natives Protest Redskins in Phoenix and Redskins Fans Show Their "Respect."
Posted by Rob at 3:03 PM