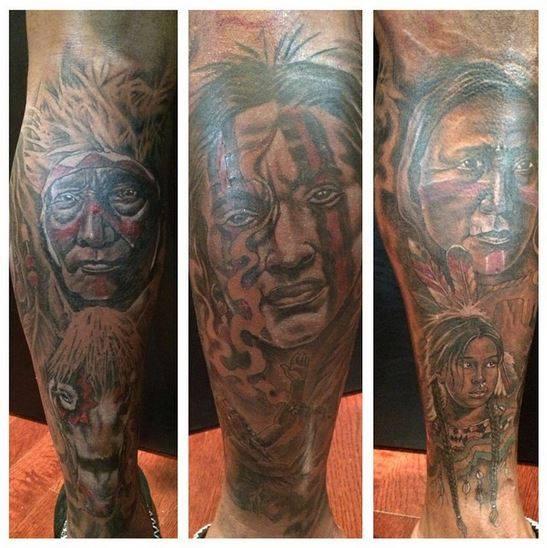 Dr. Adrienne K. ‏@NativeApprops
Absolutely hilarious this was promoted on @redskinsfacts. So typical of their "facts"...claiming respect/honoring but lacking basic research

And a comment from Dinah on Facebook:His instructions were: "Look up some chiefs, look up this and that." Glad he's so deeply committed to researching and understanding his supposed Cherokee ancestors.

The stereotype here, of course, is that all Indians are interchangeable or the same. Wrong.

From what we can see, the images may have come from romanticized paintings by non-Natives. For instance, by Kirby Sattler, who is infamous for inspiring Johnny Depp's crow head.

I say paintings because modern Indians generally don't paint stripes on their faces. And old photographs usually aren't this detailed and aren't in color.

There's also a painted horse, which undoubtedly comes from a Plains tribe. The Cherokee don't have any tradition of painting their horses.

I'd have been impressed if the tattoos included Sequoyah, John Ross (in suit and tie), Will Rogers, Wilma Mankiller, et al. Because these are among the most famous Cherokees in history.

But they didn't wear feathers and leathers, didn't paint their faces. They don't look primitive or uncivilized. They wouldn't suggest how "cool" and "tribal" Moss is. And that was Moss's real goal: not to honor actual Cherokees, but to link himself to savage warriors.

He may have Cherokee blood--although everyone from Elizabeth Warren to Johnny Depp claims that and they're usually wrong. But I'd still call him a wannabe. He's trying to become Indian just as a mascot lover does--by appropriating and imitating someone else's culture.
Posted by Rob at 12:30 PM