I recently started watching a TV channel with old shows, so I'm catching up on some episodes featuring Indians. Here's one from The Lone Ranger (airdate: July 13, 1950):

This is a common setup. It's similar to the setup in many Western movies of that era. Indeed, it may be the most common setup involving Indians. Good Indians stay on the rez; bad Indians try to leave.

Left unstated are the conditions that created this setup. The white man waged war on the Indians...killed or starved them into submission...locked them into an area with the promise of food and supplies...then left them to suffer and die. It was manifestly corrupt and immoral, but movies and TV shows don't mention that.

This setup is like saying, "Good prisoners stay in jail; bad prisoners try to escape." Well, who are these prisoners? Who put them there, and why? Those questions rarely get asked or answered. 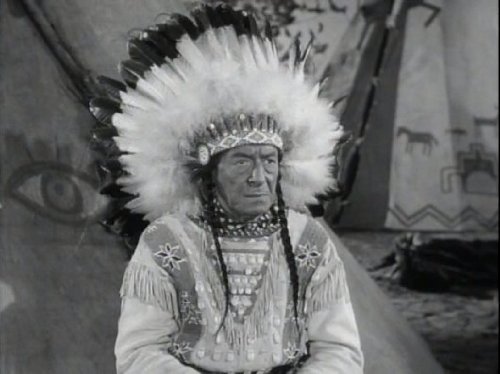 Sergeant Pala is of course a half-breed, the worst kind of Indian. He wants to be a white man, but his reddish skin makes him a lowlife thug and miscreant. No matter how hard he tries, he can't wash away the taint of savagery in his blood.

As for the premise, I guess Geronimo's band of Apaches rebelled from "captivity" on a reservation. Did any others? If so, I think it was rare.

Sure, white farmers, ranchers, and miners forced Indians off their land--the Trail of Tears being the most famous example. But did white speculators trick Indians into violating their own treaty? And getting themselves expelled? I've never heard of a case.

Anyway, the premise is a little complex for a half-hour TV show, but it's reasonably plausible. It could've happened even if it didn't.

The other element not mentioned in the summary is Antonette "Toni" Carver, a white artist who's traveling alone. She sneaks onto the reservation in defiance of Army regulations to paint White Eagle. Every element of this rings false. I haven't heard of white women traveling alone and seeking Indians during the Indian Wars.

It pretty much goes without saying that Jay Silverheels is the only Native actor in the episode. The others are played by white actors with a history of "redface" (portraying Indians).

Tonto immediately launches into his stereotypical Tonto talk: "Me do this, me do that." How does he speak passable English but not understand "I" vs. "me"? As usual, he exists primarily to set up the Lone Ranger with questions: "What we do now, kemosabe?" Oh, and to get captured, so the Ranger has someone to rescue before the big finish.

The story starts with Standing Tree finding a cache of guns and Sergeant Pala killing him. He then tells Ira Boles, head of the Empire Land Company, what's happening. Pala is in charge of stirring up the bad Indians--giving the guns to Red Moon and his followers. Boles tells Pala he wants results now, not later.

Sure enough, White Eagle sips some stew and keels over. Tonto recognizes the food as poisoned, but Pala and Red Moon blames the chief's death on the painting. Tonto tries to run, but Pala's men capture him and take him to town. They leave Carver for Red Moon to sacrifice by burning her at the stake.

And sacrificing the evil sorceress? By torching her? Holy Joan of Arc, Batman!

Finally, the Lone Ranger rescues Tonto and they arrive to stop the sacrifice. The Ranger previous disabled the guns, but now claims he can make them stop working with his great magic. When the guns click, the Indians believe he's a powerful spirit and surrender.

Again, superstitious nonsense. Were the Indians going to use guns without knowing how they worked? How about testing them rather than trusting a shifty white man? How about attacking the Ranger and Tonto with their backup weapons: bows and arrows, knives, or whatever?

At that point, Indians had been using guns for centuries...but they were so childishly ignorant of mechanics that the Ranger could fool them? It does not compute.

All in all, White Man's Magic is a poor representation of Indians. Worse than the usual '50s-era movie or TV show, which sometimes are mediocre or even decent. The only good point is invoking an evil land company rather than an evil rancher or Indian agent. Land theft was a joint operation by government, business, and individuals, not just the work of a few "bad apples."