The Runaways in Zorro

Another old TV show I've seen recently is Zorro. For those who don't know it, it's basically a Western set in the Spanish colony of California.

The timeframe is unclear, but we can narrow it down. Some of the show is set in Los Angeles, which was founded in 1781. But the characters pay homage to Spain, not Mexico, which gained independence in 1821. So the stories take place sometime around 1800.

I saw only one Zorro episode involving Indians: The Runaways, which aired January 8, 1959. Indians must've been more common in reality than they were on the show. In fact, Wikipedia gives us some background on the era:

History of Hispanic and Latino AmericansIf the Spanish population was 10,000 in 1846, it must've been only a few thousand in 1800. So a few thousand Spaniards vs. 200,000 Indians. The Indians outnumbered the Spaniards by 100 to one...but on Zorro, it was the opposite.

On to the episode in question:

The RunawaysComment:  To be specific, Romaldo and Buena are indentured Indian servants. We learn Romaldo agreed to three years of slavery servitude service for schooling at the mission. Don Tomas seems to think he was doing Romaldo a favor with this deal. Romaldo doesn't disagree, except he wants to marry Buena while he completes his service.

"Romaldo" is kind of an odd name. I wonder if it was meant to evoke Ramona, probably the most famous story involving California Indians. Maybe the writer thought, "Should I name the characters Ramon or Ramona? Nah, too obvious. But Romaldo is close. Let's make the guy Romaldo."

How does the episode handle Indians? On the plus side, Romaldo and Buena talk, dress, and act like their Spanish counterparts. There's no Tonto talk, no feathers or leathers. That's good.

On the minus side, Buena and especially Romaldo look totally non-Native. Buena was played by Gloria Castillo, presumably a Latina based on her name. But Romaldo was played by Tim Pittman, who looked as Anglo-Saxon as his name sounds. 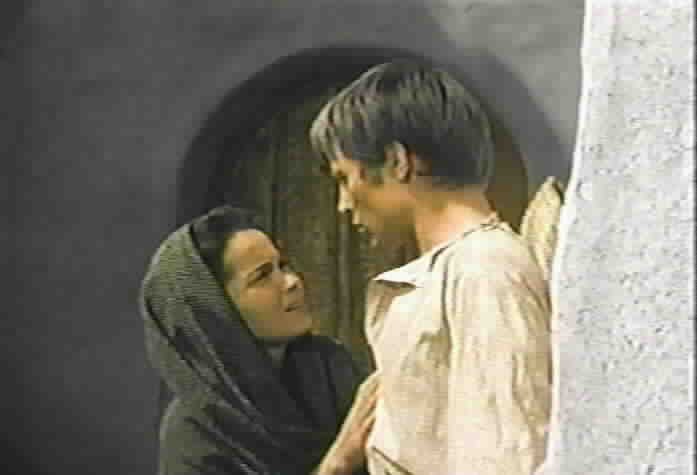 A bigger problem is the complete lack of historical context. No one questioned or even raised the status of California's Indians. What was the justification for the mission system? How was it working at that point? How did the Indians feel about it?

Even if we focus on Romaldo and Buena, the questions remain. Don Tomas made the indenture system sound voluntary, but was it? How did the pair come to be indentured? What were their alternatives? Where would they have been if they had "chosen" otherwise?

Don Tomas got three years of labor for the price of school tuition. I don't know the economics of that era, but it sounds like a good deal for him. In any era, a year's wages ought to equal many years of basic schooling (reading, writing, arithmetic).

In reality, the mission system was the beginning of the end for California Indians--the beginning of genocide. But you won't learn that on Zorro or any Western of the 1950s. Then as now, mass entertainment was about reinforcing America's founding myth. Namely, that the white man came to tame the wilderness and bring civilization to the savages.

You can watch the whole episode here:

For a better take on Zorro, read Isabel Allende's novel of the same name. For more on the subject, see California's 4th-Grade Mission Mythology.
Posted by Rob at 6:00 PM