Some people live-tweet events such as the Oscars. This year I posted a running commentary on Facebook. Here it is:

I guess Chris Rock is giving a speech rather than telling jokes this year? ‪#‎OscarsSoWhite‬

"Writers, we know that you are the true backbone of the industry, and we love you for it. We also think you're all extremely hot."

Commercial break! Debuting next week on ABC: The Real O'Neals. Finally, an Irish American family gets a turn in the spotlight. ‪#‎diversity‬

After #Blackish, #FreshOfftheBoat, #Empire, and #DrKen, it's about time someone featured a white family.

Kind of awkward to bring out Stacey Dash since everyone knows she's a Fox commentator and apologist for white supremacy. What's up with that? ‪#‎OscarsSoWhite‬

Response: awkward silence from the audience.

Pretty average ‪#‎Oscar‬ show so far. Obviously they decided to make it mainly about diversity. Slamming the issue with a sledgehammer rather than slicing it with a scalpel.

Consider the Merkin: A Brief History of Pubic Wigs in Hollywood

Guy thanked his one-week-old daughter. Not sure what her role was in the years-long production of Mad Max: Fury Road.

The "thank you" crawl beneath the award winners is a good idea. Everyone gets thanked on-screen and the winner can focus on thanking the key people. Or saying something distinctive and memorable.

At least the show is zipping along nicely. None of Neil Patrick Harris's middling stunts.

We get to see some Indians on screen--usually savage warriors--whenever they play the standard clips from The Revenant. Yay? ‪#‎OscarsSoWhite‬

Giving Andy Serkis recognition for, well, anything is a novelty.

So far nothing that qualifies as a memorable moment. ‪#‎OscarsSoBland‬

Picking up the pace

Really? Selling your daughter's Girl Scout cookies? Is that supposed to be funny and charming rather than crass and competitive? ‪#‎OscarsSoMercenary‬

Louis CK was good. All the awards should be presented like that--with smart and seemingly spontaneous riffs.

Leonard Nimoy got the final spot in the "In Memoriam" montage! ‪#‎SpockLives‬ ‪#‎OscarsSoVulcan‬

Vice President Joe Biden! Another white guy! What film was he in? ‪#‎OscarsSoWhite‬

Cue the conservative Twitter outrage over the domestic violence segment. How dare the Oscars talk about the real world? It's only movies!

Unlike the Stacey Dash bit, that will go on the show's highlight list.

Pharrell has hair? Who knew?

Where's Sean Penn to make a follow-up joke about immigrants?

Not sure why the show is over three hours. It's not as if they padded it with a lot of unnecessary bits. ‪#‎NeilPatrickHarris‬ ‪#‎OscarsSoLong‬

Gender confirmation surgery! I haven't heard that term before. ‪#‎OscarsSoFluid‬

DiCaprio won because of the kid!

Another one for the highlight reel. DiCaprio uses his speech time effectively.

2016 Oscar Winner DiCaprio Dedicates his speech to Mother Earth and Indigenous PeopleGlad to see Spotlight won Best Picture. Just because I hate it when a film gets "momentum" and sweeps.

Thus endeth the Oscars. A few good moments in the second half, but still nothing special. ‪#‎BlackLivesMatter‬

And Fight the Power plays over the final credits.

Retweeted Kate Sheppard (@kate_sheppard):
I haven't seen any of these movies but hey, nice to see attn paid to sexual assault, climate change, and need for investigative journalism.

Retweeted Dave Pell (@davepell):
The message of Spotlight.
The media helps to protect us. Stop maligning it.

I forgot that conservatives also will rage at the Girl Scouts. Damn liberal feminist atheist girls! 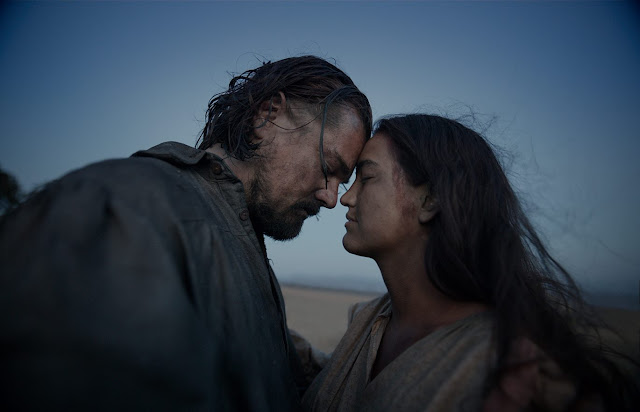