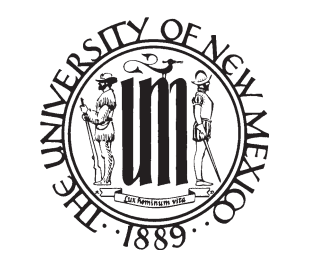 A Facebook discussion of this key point: Students protest a UNM seal that shows a frontiersman and a conquistador, even though a Native woman designed it.

I wonder if she was given free rein or a strict mandate. Kind of hard to believe someone thought a frontiersman and a conquistador were great ideas in the 21st century.

Apparently the redesign was back in 1980. I can understand that some people, including Natives, might not have thought about the problems much back then.

But I'm surprised it hasn't been protested out of existence since then. A frontiersman and a conquistador don't have anything to do with education. If anything, they're anti-education.

The message is nothing but, "Europeans founded this state and school. Europeans made us great." How is that not glaringly obvious to everyone--not to mention embarrassing?

They're even holding a gun and a sword. It's a pure conquest message--with Indians and their land as the implied booty. There's no educational message whatsoever.Oddly, their school motto is "Lux Hominum Vita (Life, the Light of Men)." I guess because "Veni, Vidi, Vici" was taken?

For more on government seals, see Whitesboro Issue Increases Awareness and Flipping the Whitesboro Script.
Posted by Rob at 9:00 AM