What's the flip side of marginalizing and trivializing Natives and women, as so much of our culture does? This:

By Taté WalkerThe missing women you don’t hear about: How the media fails Indigenous communities

When indigenous women disappear, their cases often get little coverage—and their identities can be erased

Below:  "Gladys Radek holds a photo of her niece, Tamara Chipman, who disappeared in 2005 along Highway 16, the so-called Highway of Tears, east of Prince Rupert in northern B.C." (Gladys Radek) 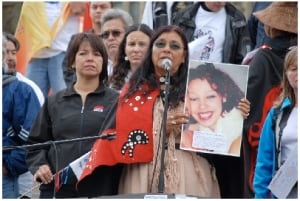