An article on casting in TV is generating a lot of controversy:

Pilots 2015: The Year Of Ethnic Castings

By Nellie AndreevaIt started off fine, but then veered into troubling waters with these paragraphs:Critics destroy Deadline

You can see the original headline, which was more specific and reflected the content better, above. In any case, critics quickly ripped Andreeva's piece:

By Joshua AlstonHey, white Hollywood: Looking for work in the age of “Empire”? Here’s some friendly advice

The "ethnics" are invading TV!! What's a struggling white actor to do?!

Nostalgic for the good ol' TV days of "Friends" and "Seinfeld," insiders are whining about "unfair" "ethnic quotas"

By Sonia SaraiyaDear Nellie Andreeva and Deadline, About Your Piece on Too Much “Ethnic Casting” on TV

By Anna SilmanComment:  For more on the subject, see TV Starts to Reflect America and White Males Still Dominate Hollywood. 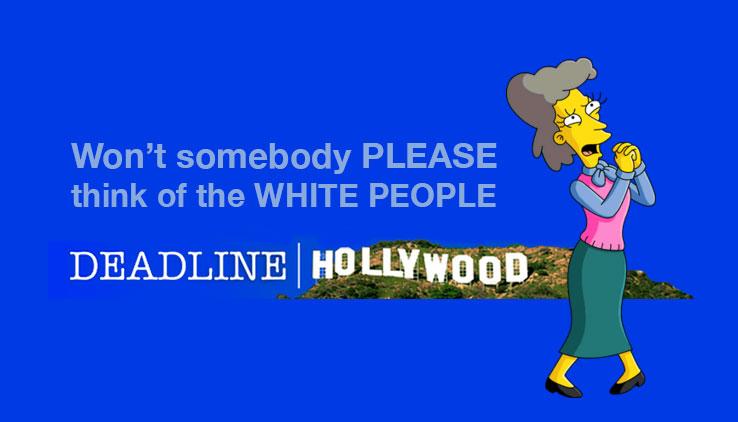 Considering how much uproar the piece ignited, the apology is pretty weak, with co-editor in chief Mike Fleming Jr. seeming to place a lot of blame on the headline, which “created a context from which no article could recover.” As he put it: “My co-editor-in-chief Nellie Andreeva’s goal was to convey that there was such an uptick of TV pilot casting of people of color that it pinched white actors who’ve historically gotten most of the jobs, and to question if this could last if it was being treated as a fad. All this was undermined by that headline (which we changed after the fact) and a repetition of the word “ethnic” that came off cold and insensitive.”

The lame excuses continued, zooming in on the use of the word ethnic and the editors’ failure to respond to criticism in a timely manner (when arguably the piece just shouldn’t have been published to begin with).