Correspondent Mark Anquoe alerts us to a stereotypical social campaign going on in Italy:Comment:  This chief is a "red" Indian with red warpaint, a red headdress, and a red nose. If he has a name, I'm betting it's Chief Red Nose.

To sum it up, Canada has an anti-drinking campaign that uses a red-nosed reindeer. Italian minister Meloni thought that was a good idea but decided it would work even better with a red-nosed Indian. Apparently she thought the scary-drunk chief would coax more people into sobriety than a happy-go-lucky critter.

Besides the alcohol connection, this chief looks mean and is about 150 years out of date. In short, it's a pure stereotype and a bad idea.

By the way, Mark and Corine are involved in the battle against the Carpinteria Warriors. Corine was an early supporter of PEACE PARTY--a decade before everyone else.

For more Native stereotypes, see the Stereotype of the Month contest.

P.S. I made minor corrections to these e-mails, but I didn't try to fix the slightly fractured English.

Below:  "Chief Red Nose say you no drink'um!" 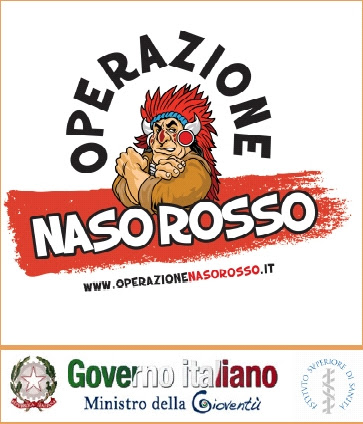 Thanks for this post. We are working to stop this campaign...
Please write to the Italian Minister for Youth, Ms. Giorgia Meloni, your opinions to the email address info@gioventu.it
Alessandro Profeti, Italy
Nativi Americani.it, italian Blog on support Native American People
www.nativiamericani.it

You're welcome. Thanks for bringing it to our attention.