Scalping in V for Vitamins

Savage Indians in The Sweepstakes

"Gilligan's Island": The Sweepstakes (TV Episode 1965)
Episode aired 14 October 1965Comment:  In a "Wild West" dream sequence, Prospector Howell and Marshal Gilligan meet sweet, innocent Mary Ann. The following dialogue ensues:The obvious meaning is that Indians are anonymous and interchangeable savages. As if tribes in three widely separated regions took turns surrounding a cabin and picking off settlers one by one.

The dialogue doesn't explicitly say the Indians killed anyone, but it strongly implies it. No one would get the impression that the Indians kindly "helped" the settlers pack up and move to a better location.

It's a typical example of 1960s stereotyping--trying to have it both ways. The writers might have learned enough not to label Indians as bloodthirsty killers and scalpers. But they wanted to use that racist idea, so they cloaked it in veiled language and slipped it in.
Posted by Rob at 1:07 AM 0 comments

Savage Indians in The Little Dictator

Another stereotypical episode of Gilligan's Island:

The setup is that Gilligan is dreaming about being a Latin American dictator. Everyone shows him glimpses of "his" country through a window, including Ginger aka Secret Agent 0036. The scene goes like this:So Indians = a country in terrible shape. Chaos and destruction. The decline and fall of civilization.

That's stereotypical.
Posted by Rob at 10:30 AM 0 comments 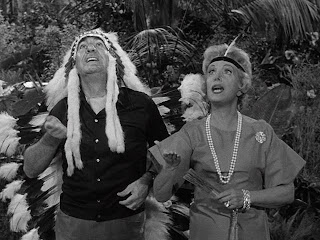 The fact that it's in the script makes the stereotyping worse. Clearly the writers didn't know the difference between Plains and Cherokee Indians, or anything.
Posted by Rob at 10:00 AM 0 comments

Review of Sikumi (On the Ice)

Sikumi (On the Ice) by Andrew Okpeaha MacLean | Short Film

Sikumi (on the ice)Comment:  I agree with this opinion. I've seen enough Native shorts to say Sikumi is one of the better ones, but the best?

For more on Sikumi, see National Distribution for On the Ice and AIFI's 2011 Winners.
Posted by Rob at 9:07 PM 0 comments

Comment:  I don't agree with this review at all. I enjoyed seeing life in the little-known Laguna Pueblo. The ceremony showed us something other than the usual families mired in tragedy or dances in regalia. Shots of a train passing by and animated paper cutouts kept the cinematography fresh.

All in all, I'd say Grab is one of the better Native documentaries I've seen.
Posted by Rob at 11:01 AM 0 comments

Australian TV host in a headdress

The Today show slammed for 'cultural appropriation' after Steven Jacobs wears Native American headdress and speaks with an Indian accent... as program's 'We love Australia' special bombs with bad ratings

Why Is This Still A Thing?: The Washington Post Releases New R*dskins Poll

Blackhorse to Grads: ‘We’re Not Going to Take It Any More’

Skins Poll: Tribes Have Spoken, Which Is All That Matters

Blackhorse: A Single Poll Will Not Shut Us Up