Someone posted a link to this British product on Facebook's Native Appropriations page:

Dress Up Fridge MagnetsComment:  Dressing up your dog as an Indian chief, as in the photo...that kinds of says it all about what's wrong with this product. Needless to say, selecting two ethnic groups for this dubious treatment is discriminatory.

If you don't see it, add a "blackface" magnet with kinky hair and big red lips. Now do you get it?

Is it a coincidence that the company treats these two brown-skinned groups as exotic others? And trivializes their diverse cultures with stupid stereotypes? Probably not.

Email ThisBlogThis!Share to TwitterShare to FacebookShare to Pinterest
Labels: chiefs, Stereotype of the Month, stereotypes, toys

Mastodon Say Their Thanksgiving T-Shirt Is Not Racist

From the comments on the second posting:Fans prove racist message

Stop Helping! Band Angers Natives With Shirt; Insists It's Pro-NativeAnd:And:Comment:  Erica and the Natives win this debate by a knockout. With their comments, Mastodon fans demonstrate that they didn't come close to understanding the band's message.

Not only did they like the sexy "Pocahottie," but they seem to have absorbed the notion of Indians as inferiors. Perhaps because the Native woman was scantily clad and kneeling with a gun to her head, which makes her look inferior...duh.

One obvious way to convey the alleged message would be to have a well-dressed man, perhaps a Wampanoag sachem, offering a turkey to the Pilgrim. But without an Indian woman as a sex object, that presumably wouldn't have sold as well.

We don't know if Mastodon thought about this issue, but they--as well as their fans--failed to understand the protesters' point. It's not about the shirt's anti-Thanksgiving message, it's about its anti-woman message. One has to be as dumb as a mastodon not to get that.

In short, this shirt is a colossal fail. 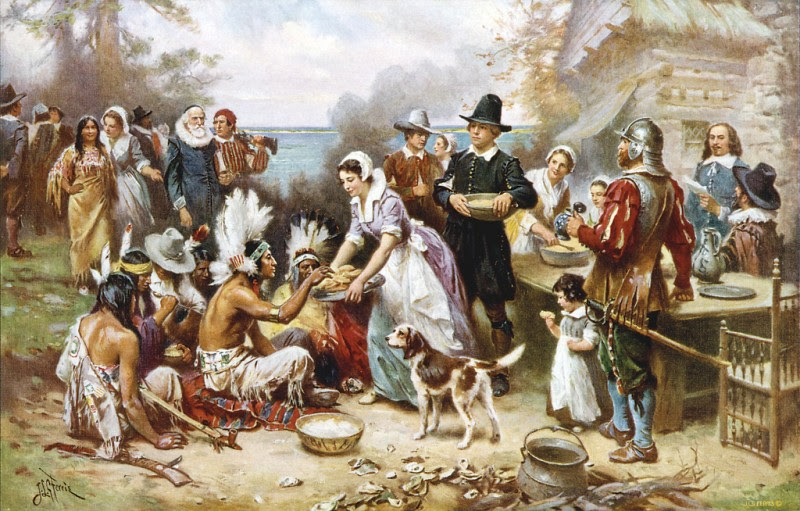 The best Thanksgiving cartoons I saw this year: 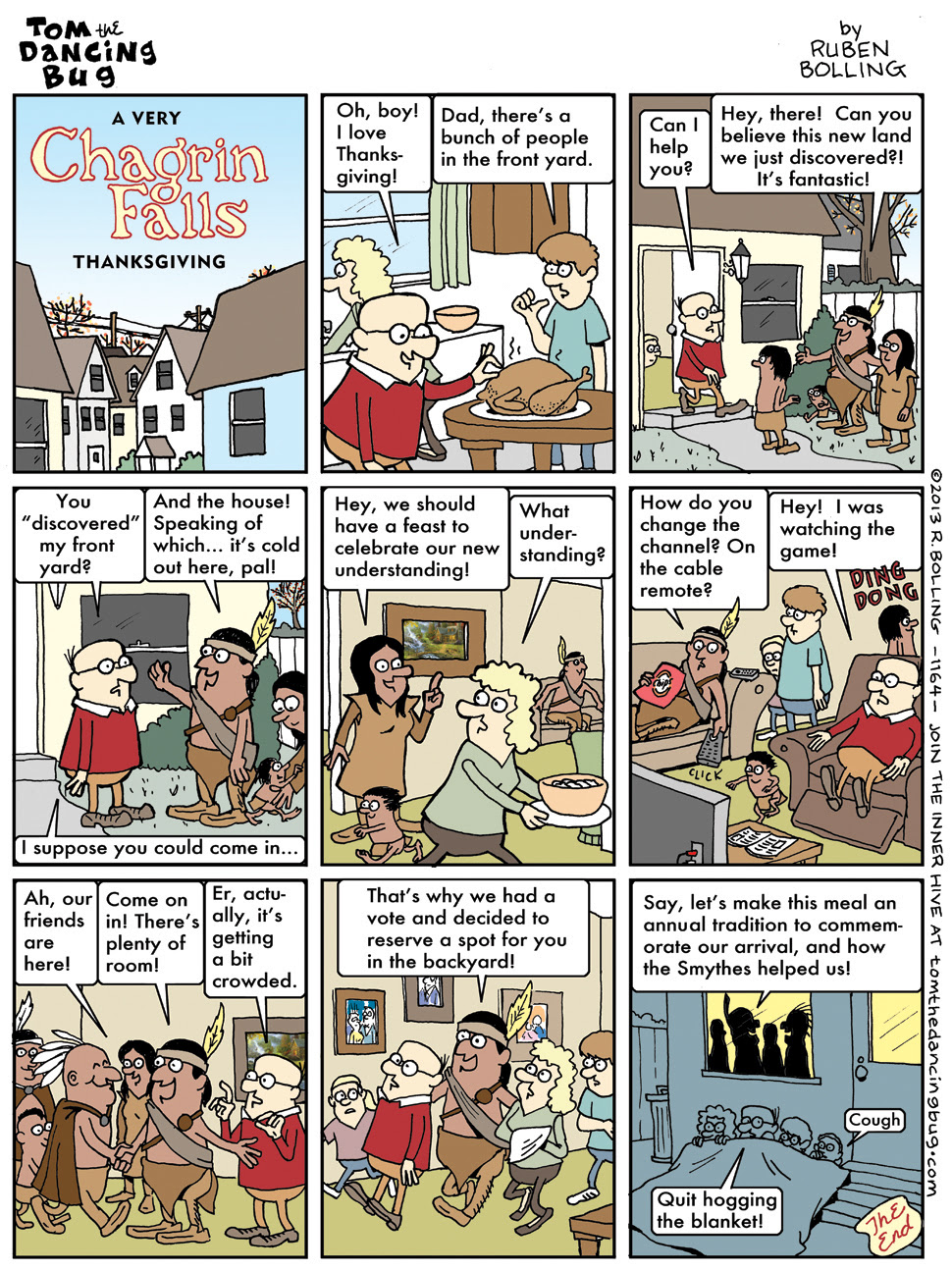 And a poem in the same vein:

'Thanksgiving,' a Poem by Jonathan Garfield

And a summary of their experiences:

Below:  "The True Spirit of Thanksgiving float along the parade route at the 87th Macy's Thanksgiving Day Parade." (Cliff Matias)

The rage of angry white men

By Mark KarlinAnd:Comment:  For more on the subject, see Republicans Want to Restore Confederacy and "Defund Obamacare" = "Nigger, Nigger."

"Ask a Slave" on Indians

YouTube Comedy 'Ask a Slave' Tackles the Thanksgiving Question: 'What About the Indians?'
Posted by Rob at 7:30 AM 0 comments

We begin with Robin Leach, the former host of Lifestyles of the Rich and Famous, who is as clueless as his history suggests:

By Robin LeachLeach didn't hear any of the dozens of Native "accusations" at Halloween? Perhaps his cocoon of white privilege cut off his hearing. Or perhaps he's an ignorant twit.

As I tweeted to him:More creepy crawls

Fortunately, there was some good news:

These critiques occurred before, during, and after the Redskins' codetalker stunt. From what I've seen, they reflect the ongoing opinion against the racist nickname. As far as I know, the codetalker stunt didn't change anyone's mind.

The ultimate party pad! Miley Cyrus erects a giant $25,000 teepee in her back garden after wild 21st birthday celebrations

By Louise SandersMiley Cyrus Is 21 and Has a $25,000 Tipi in Her BackyardComment:  For more on Miley Cyrus, see Miley's Brother Gets "Chief" Tattoo and Billy Ray Cyrus Gets Native Tattoos.

By Tim KeownAnd:The Redskins Honor Navajo Code Talkers, Still Go By "Redskins"Comment:  So 80 years after the the team chose the name to "honor" Indians, it actually honored some actual Indians. Can you say "too little, too late"?
Posted by Rob at 9:30 PM 0 comments

By Ruth HopkinsAnd:Comment:  Perry's comment on Kimmel shows her not-so-unconscious thinking. She really does consider Indians and Asians to be strange creatures, not human beings. She'd never talk about skinning a white or black person, but other minorities are nothing more than costumes or "skins" to her. She can put them on and take them off as she pleases, play the exotic "other," and still retain her white privilege and power.

For more on the subject, see Russell Brand as an "Indian Savage" and "A Sight for Squaw Eyes."

Below:  Russell Brand and Katy Perry at her “Cowboys and Indians” 2011 Birthday Bash. 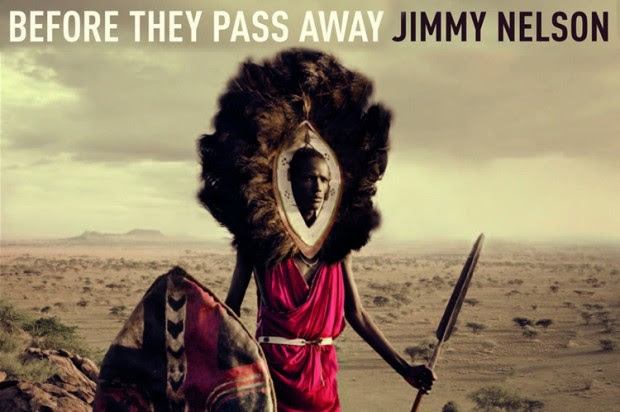 Owner Dan Snyder has put selfish greed over good will toward all in the "Redskins" debate. As you can see below, he epitomizes America's history of ignoring real Indians while appropriating their resources and cultures.

Here's what LastRealIndians had to say about this on Facebook:

Reviews of The Inconvenient Indian

By Hans TammemagiThomas King Dishes on Being the Ultimate Inconvenient Indian

By Hans TammemagiThe Hilarious Brilliance of 'The Inconvenient Indian'

On the 50th anniversary of John F. Kennedy's death, Indian Country Today looks at what he did for Indians:

JFK Was a Mighty Warrior for Indian Country

By Chris StearnsBelow:  "This image of John F. Kennedy was taken by White House photographer Cecil Stoughton. Kennedy was president at the beginning of the Tribal Self-Determination Era, though he wasn't alive long enough to see the fruits of his labor in that area."

Comment:  If Americans heeded the message below, that alone would've been a great achievement. Alas, I don't think they did.

For more on the subject, see Best and Worst Presidents for Indians.

Email ThisBlogThis!Share to TwitterShare to FacebookShare to Pinterest
Labels: termination

A third item in our ad hoc trilogy of postings about Indians and alcohol:

Meeting about tribal land ends with slurComment:  So the Confederated Salish and Kootenai Tribes want to take a sacred site into trust--essentially making it part of their reservation. In response, a county planning board chairman goes on a fact-finding mission and sees "drunken Indians" in jail.

What the hell does one have to do with the other? Is he saying Indians are so drunk, so morally degenerate, that they don't deserve to get their sacred site? That they're too intoxicated to manage the site properly? That they'll sell it for "firewater" if they get half a chance? Or what, exactly?

This is a classic case of how Native stereotypes have real-world consequences. Wisniewski thinks Indians are drunks, which means they're savage and uncivilized, which somehow disqualifies them from owning or managing the property. There's absolutely no link here; every tribal member could be a drunk and it wouldn't affect their claim. But Wisniewski is willing to go public with his racist insinuation.

For every idiot like him, there must be 10 or 100 who feel the same way but are too smart to say so. "Why are we wasting time on drunken savages?" this thinking goes. "Let the bums sober up and get a job and then we'll consider their claim."

It's racism in action, and it stems from centuries of stereotyping. People believe Indians are savage and uncivilized so they ignore Indians' problems and needs. There's a direct connection and stories like this one prove it.

I'm amazed that some people, including some Indians, don't get this. Why do you think Wisniewski brought up a law enforcement issue at a land-into-trust meeting? He's trying to use America's prejudice against Indians to sink the deal.
Posted by Rob at 8:00 AM 4 comments 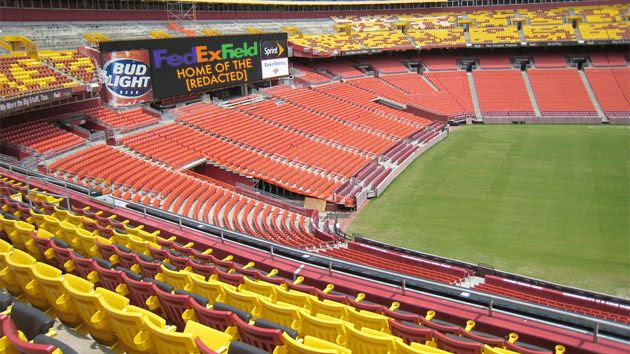 By Vincent SchillingComment:  I gather that voice recognition software does some captioning these day. But it sounds as though a person did this captioning and made the so-called mistake.

The word "alcoholic" came in a list of tribes between "Cheyenne River Sioux Tribe" and "Choctaw Nation of Oklahoma." The audio and visual both indicate that "alcoholic" was inserted between the tribes' names for no reason. It wasn't a garbled version of a tribal name or anything else. It was an addition with no counterpart in the tribal roll call.

I'm not sure how you "accidentally" insert a word where there should be nothing. Sounds like somebody pulled a stunt to express his opinion of Indians. They don't deserve gold medals, he may have thought, because they're drunks.

Email ThisBlogThis!Share to TwitterShare to FacebookShare to Pinterest
Labels: football, mascots, sports, Stereotype of the Month, stereotypes, Trail of Tears

Fraternity-sorority event with theme of Native Americans gets complaints

By Sean McMinnWhat's wrong with the party?

By Joe TaricaCal Poly Frats Hold Classic 'Colonial Bros and Nava-Hos' PartyComment:  I'm sure we could find more wrong with this party idea. For instance, casting men as conquerors and women as objects of conquest. Holy metaphor, Batman! Let's act out how white men raped Indians, literally and figuratively, in the guise of a party.

Below:  An image from the Drink nightclub's "Sexy Pilgrim & Indian Party."

Myths about Indians and alcohol

Native Americans Were Not Introduced to Alcohol by Europeans 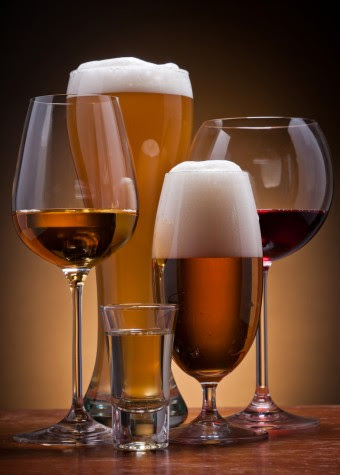