Native activists took to Twitter to criticize Adam Sandler and his Ridiculous 6 movie:

By John BowmanCan the recycled bigotry of Adam Sandler's Ridiculous Six do some good?

By Russell ContrerasComment:  I believe activists tried to create a Twitterstorm using the #NotYourHollywoodIndian tag. But I saw only a few postings on the subject, and didn't hear anything about it afterward. I don't think it was a big success.

By Jon Santaanta ProudstarAs a Native Actor, I Applaud Those Who Walked off the Set of Adam Sandler’s Racist Movie

Below:  "Actors David Hill and Loren Anthony walked off the set of Adam Sandler's latest project."

Some postings show what happens when you engage with mascot fanatics:

Biloxi High School Alumni Perpetuate Ignorance, Cyberbully Natives, and Dictate Who is “Indian Enough” to Have an Opinion in Cultural Appropriation Debate.

By Kayla FaithBiloxi supporters and detractors argued back and forth until this:Below:  "Deloria Many Grey Horses-Violich whose Facebook account was repeatedly suspended due to her Indigenous surname."

Kayla Faith also took on a Biloxi High supporter who offered the usual tired arguments for Indian mascots. A sample:

A response to a Biloxi residentBelow:  Old school images show how Biloxi High students have always viewed Indians in false and stereotypical terms.

Someone listens to an Indian

One person did listen to the Indians who protested the Biloxi "Indians," including one from the Tunica-Biloxi tribe. His name is Jean-Luc Pierite and she began her response to him:

Just a Biloxi girl….Who has opened her eyesComment:  For more on Biloxi High School, see Biloxi Headdresses Are "Dignified and Proper"? and Indians Protest Biloxi "Indians."

Deloria Many Grey Horses started a petition to change the nickname of the Biloxi High School Indians. This led Biloxi supporters to get her banned from Facebook. The reason? Because her Indian last name supposedly violated Facebook's policy against using fake names.

For more on Biloxi High School, see Biloxi Headdresses Are "Dignified and Proper"? and Indians Protest Biloxi "Indians."
Posted by Rob at 6:00 AM 0 comments

Dances with Wolves wasn't a documentary, you dimwitted "musician." It was a piece of fiction, just like Ridiculous 6.

You've confirmed our point: that movies can and should be more authentic than your ridiculous trash. If Dances with Wolves can do it, so can Ridiculous 6.

By Noel AltahaAltaha's conclusion:The bravery of the Native American actors who walked off Adam Sandler’s movie 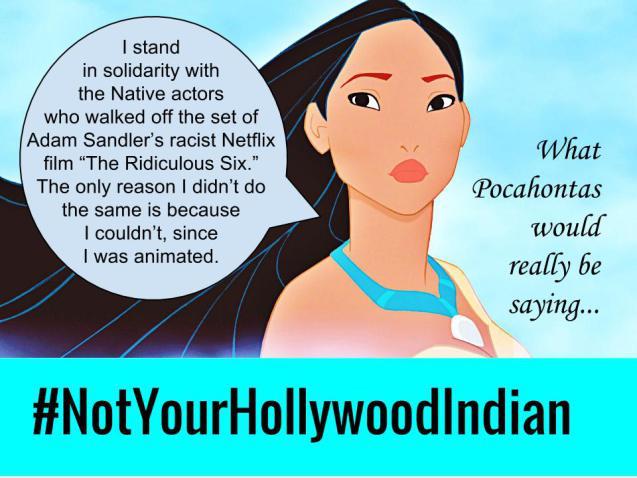 By Mark NewtonComment:  Let's address the question of whether Ridiculous Six is a legitimate satire. For starters, who's the butt of the jokes: the Indians or someone else? If it's someone else, where is that in the script? Because it isn't evident in the excerpts.

Another way to put this is: How are these "jokes" any different from the ones in a racist movie? Again, if some "context" makes them different, where is it? Because it isn't evident in the excerpts.

True, we lack the entire script. But we have the judgments of the people who were there. They confirm what's evident in the excerpts--that the "jokes" are flat-out racist. Until Sandler and Netflix demonstrate otherwise, that judgment stands.

By Ben BairdAnd a 2012 report on the return of the Hurons logo:

Below:  Savage Hurons aka Indians.

Two weeks after the Biloxi "Indians" controversy broke out, we finally heard from people connected with the real Biloxi Indians:

Biloxi Indians aren't complaining about band's use of name, headdress

By Paul HamptonA lack of complaint about an issue that hasn't come up is basically nothing, of course. It's a far cry from approving or disapproving the mascotry.

Unlike the non-Native PR flack quoted above, here's what an actual Tunica-Biloxi Indian had to say:

Educate yourself about the people of Tunica-Biloxi

"That's not comedy when it comes to Native American stereotypes because we're always portrayed as the 'drunk Indian,' and that's just perpetuating those stereotypes," Allie Young says

By Zach SchonfeldComment:  A full-blooded Navajo made darker? Subjected to "redface" even though she's already "red"?

How exactly does this contribute to Sandler's "humor"? Answer: It doesn't.

It's clearly an attempt to make the Indians stranger and more exotic. That is, to make them less human and more animal-like. To "other" them.

There's no explanation for this other than racism. Indians look dark, according to the filmmakers, and white people don't. Which is why activists have rightly labeled Adam Sandler and Netflix racist.

By Chris SpargoVideo: Adam Sandler's Producer To Native Actors: 'Sensitive? You Can Leave'

Coincidentally, or perhaps in response to the protest, school officials acted the same day:

By Ben BairdComment:  No one said it explicitly, but the racist frat party with students in redface is a perfect example of what the NCAA criticized. Namely, how Indian mascots create a "hostile and abusive environment." What could be more hostile than telling an actual to go back to the reservation? Or assaulting him with a beer can?

The students claimed they were "Hurons"--meaning wild savages who could do whatever they wanted. The "Hurons" identity created this problem. It gave them a license to indulge in ugly behavior, and to blame it on the Indians.

That's what Indian mascots do. And that's why they have to go.

For more on the subject, see What "Go Back to the Reservation" Means and EMU Students in Redface Taunt Indian.

Biloxi headdresses are "dignified and proper"?

School mascots: What’s in a name?

This practice stereotypes all Indians as headdress-wearing savages from the 19th century. It causes racism and ignorance toward today's Indians to flourish. And that causes proven psychological harm.

These Biloxi "Indians" are living proof of this ignorance. They don't know jack about the people they're supposedly honoring.

Even a Biloxi defender sort of gets it:

By Tara HouskaAnd:I Am Not Your Mascot, Biloxi! 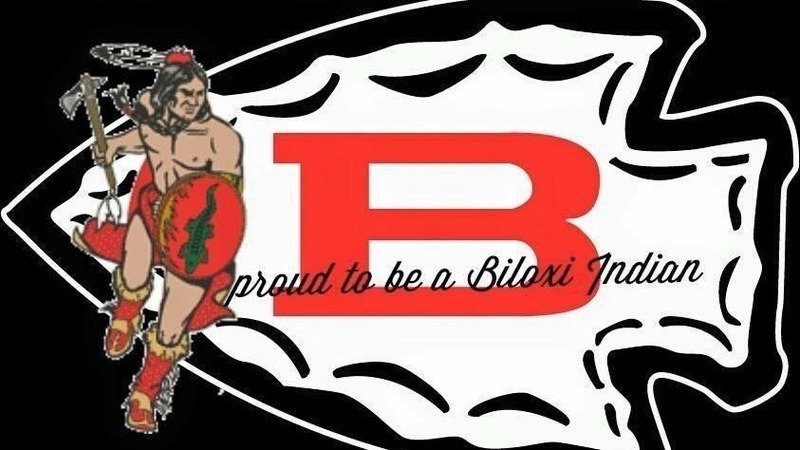 I like how the image on the "don't change" petition proves how stereotypical the Biloxi mascot is. He's savage!
Posted by Rob at 12:22 AM 0 comments

What "go back to the reservation" means

At the racist EMU party, frat boys in redface told an Indian to go back to the reservation. The "go back" sentiment often crops up when Indians dare to challenge white people.

By Simon Moya-SmithThe contempt for real-life Indians is obvious. But writer Ramone Romero delves into what white folks mean when they say "Go back to the reservation."

What Does it Mean to Say to an Indian, “Go back to the reservation”?

By Ramone Romero
Posted by Rob at 7:58 AM 0 comments

Joe the African American and Waya the Cherokee discuss mascots:

Extremely Awkward Conversation With a Native American at Redskins Game

Last week someone on Facebook said he'd heard a rumor about an incident at Easter Michigan University. Turns out it was true.

Snow Crash (Bantam Spectra Book)Snow CrashComment:  Raven is tall, dark, and handsome, of course, with long black hair. Although he's smart and well-spoken, he's a bit of a savage stereotype. He's motivated primarily by revenge, and he'll kill anyone who gets in his way.

Many Native characters have used the name Raven--like Eagle, Hawk, Wolf, and Bear--before. Marvel's mutant villain Harpoon used the whole "Alaska Native throwing harpoons" shtick six years earlier. It's not a great power; why not use automatic pistols instead?

Because a fanatical harpooner like Captain Ahab or Raven is a man outside civilization. He revels in hunting with primitive weapons, skewering his foes like meat on a stick. This barbaric preference suggests a basic lack of humanity.

As does his willing to incinerate millions of people for something done to his people generations ago. This is mass-murderer territory. Although the bomb never goes off, it demonstrates a Holocaust level of depravity.

In short, Raven is a sophisticated savage. He reminds me a little of John Rainbird, the relentless Native assassin in Stephen King's Firestarter. Both characters are more than two-dimensional cardboard but less than fully realized humans.

Overall, Snow Crash was entertaining, although it fizzled some at the end. If it were set 50 years in the future rather than in the 1992 era, I'd say it was a provocative take on what's coming. Rob's rating: 8.0 of 10.