It's a little-known fact that the 1960s comedy Hogan's Heroes featured an American Indian among its characters:

Here's the show if you don't know it:

Hogan's Heroes: Season 3, Episode 30
Drums Along the Dusseldorf (30 Mar. 1968)You can watch the whole episode here:

When Carter gets a letter from home addressed to "Little Deer Who Goes Swift and Sure Through Forest," he reveals that he's a quarter Sioux. The others tease him unmercifully with stereotypical comments.

Fortunately, the teasing isn't mean-spirited. Rather, it comes across as the usual good-natured banter you'd expect from insensitive soldiers.

Carter scowls at the stereotypes, which helps the audience understand they're not true. It becomes clear that no one thinks less of Carter or treats him differently because he's an Indian.

Sgt. Schultz also is filled with stereotypical ideas about Indians. But he's happy to meet an Indian like the ones he's seen in the movies. He eagerly wears the headband Carter gives him.

Col. Klink pretends not to care, but even he tries on the headband in the end. This German fascination with Indians is more than plausible. Although the episode doesn't say so, Schultz and Klink may have grown up reading Karl May's books and dreaming about cowboys and Indians.

Carter's archery is explained as something he learned back home. Since he was a Boy Scout, he could've learned it from either side of his heritage. It's not a stereotypical "he's an Indian so he must know how to shoot an arrow."

I'm not sure 1960s audiences would've known all the stereotypes were false. Or that they would've believed Carter was an Indian. But it was a dramatic change to present an Indian as a regular guy who didn't wear "leathers and feathers." Even more, as someone who wasn't a dark-haired and dark-skinned "other." Who could, and did, pass for white.

Where did the writers get the idea to make Carter an Indian? Probably from the fact that Larry Hovis, the actor playing him, was an Indian: 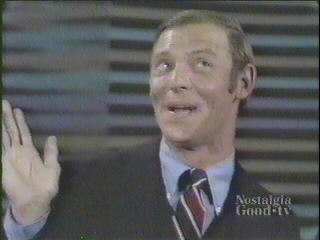 For more on the subject, see TV Shows Featuring Indians.
Posted by Rob at 11:25 PM