More on the Drums Along the Dusseldorf episode of Hogan's Heroes.

If a white-looking guy like Sgt. Andrew Carter seems an unlikely Sioux Indian, a piece of fan fiction creates a plausible backstory for him:

Hogan's men tease Carter and he responds:Sgt. Kinchloe intervenes:Years ago, some bullies challenged Carter and his brother Tommy:Carter's father told him how to how to handle such situations:LeBeau and Newkirk get the message:Excellent fanfic, Atarah. The only thing I might've done differently is tie in Carter's love of explosives to this story. He's buying fireworks, the Indians bully him, so he gets revenge by lighting a firecracker under them. This "sparks" his lifelong interest in blowing things up.

Below:  Carter about to (mis)fire an arrow at a German truck. 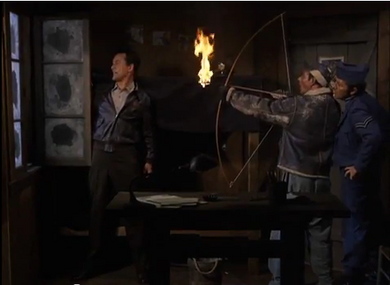