Debbie Reese reported on yet another faux Indian Halloween costume in her American Indians in Children's Literature blog:

the band Arcade Fire held a surprise Halloween show and Vanity Fair picked its "favorite" costumes. It labeled this picture "The Indian." 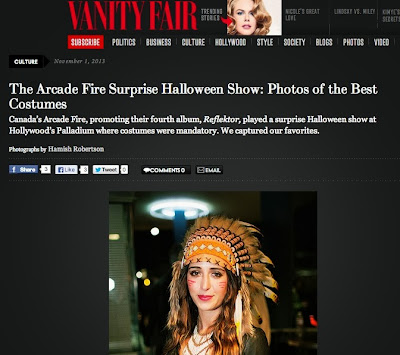 Since this was (probably) a white girl dressed as a phony Indian, Reese tweeted a comment to Vanity Fair. The magazine responded by relabeling the picture "Feathers."

Email ThisBlogThis!Share to TwitterShare to FacebookShare to Pinterest
Labels: fashion, Halloween, Stereotype of the Month, stereotypes