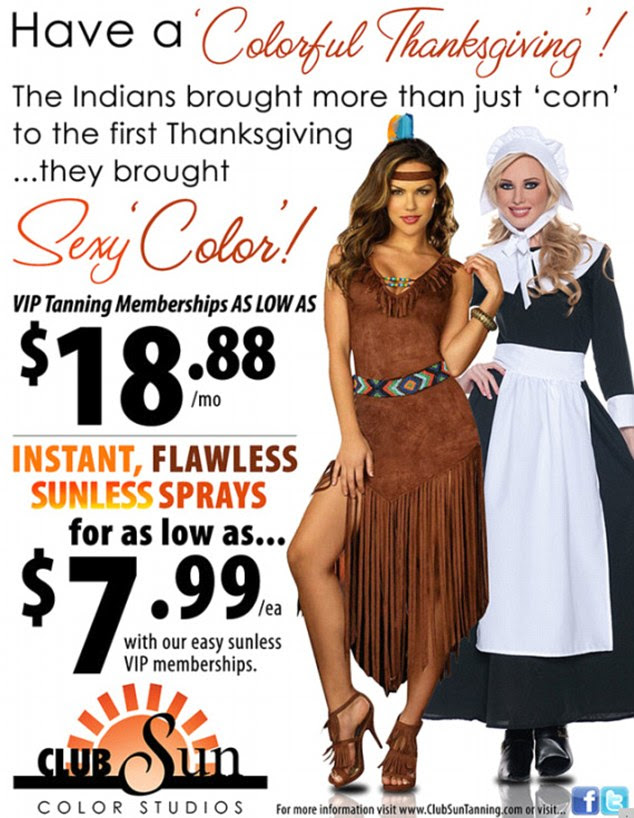 By Lisa Gutierrez...but not really:

AL tanning salon drops Thanksgiving ad touting 'sexy color' of American IndiansComment:  What's the context that makes a racist costume not racist? I sure hope it's not the tanning salon's play on the word "color." We took that into account and...sorry, the costume is still racist.

In fact, if the ad had included an authentic Wampanoag Indian dressed in a 1620s style, people might not have complained. Or not as much, anyway. They're complaining primarily about the stereotypical Pocahottie, not the "color" word or concept.

And what does its being an "in-house" ad have to do with anything? First, the company posted it on its Facebook page, which strongly suggests it was meant for public consumption. Second, racism "in house" is just as wrong as racism outside the house. It's wrong, period, wherever it occurs.

Finally, how much do you want to bet marketing director David Arnett has a tiny amount of Cherokee blood, or believes he has? That's a perennial excuse for racist behavior, and it's just as stupid here as elsewhere. Unless you're a member of a Wampanoag tribe, Arnett, you have no business stereotyping Wampanoag Indians.

The facebook page has been down since then, which also had one of their employees deriding people for being offended, and making the same stupid comparisons such as how people shouldn't dress as Santa Claus, then, because it might offend privileged white people. They're not sorry at all, except that sorry they got caught.

Right. I bet Larry Andrews the vice president is saying what most of their people are thinking.