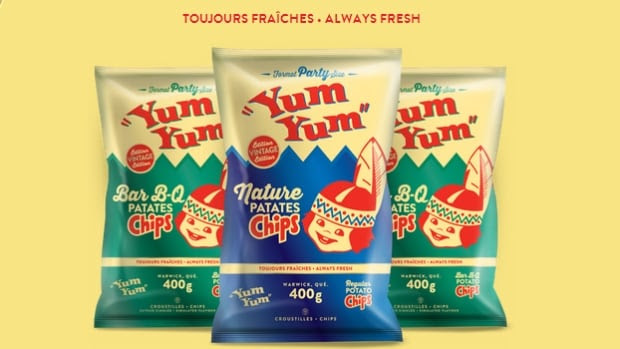 A myth debunked: No, “yum yum” is not the Algonquin word for “potato”

By Don MacphersonComment:  Let's go through the company's excuses:

It's a racist nod to the founder that looks nothing like the founder.

It's not meant to be mocking, but it's mocking anyway. It portrays real people as childish cartoon characters.

The claim that "Yum Yum" is an Algonquin word is false. Is the founder's aboriginal heritage also false?

Does the company have any other defenses for this insulting move? Because we haven't heard a legitimate one yet.

Below:  "The original Yum Yum mascot was introduced in 1959 when the potato chip company was founded." (Krispy Kernels)

A Native boy who looks like a chipmunk or a beaver? And that isn't a complete mockery of Native people? Yeah, right. 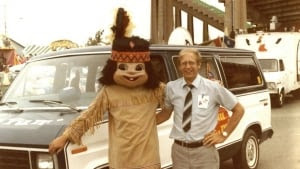 "Indigenous peoples are more than these stereotypes," one person posted. "This kind of image does not belong in the 21st century. I'm sorry if this racist image is part of your childhood."

The grand chief from a Mohawk community near Montreal told a radio station last week the campaign was in bad taste.

And the editor of the local paper in that community, Kahnawake, said some people can't believe the image has resurfaced.

"It's a horrible caricature of what one person thought that all native people should be represented with," said Steve Bonspiel, editor of the Eastern Door.

"What if they'd used any other ethnicity? What kind of outrage would there have been?"

Bonspiel said he remembers Yum Yum Chips growing up but, back then, no one made a fuss about the logo. Bonspiel says perhaps people weren't as politically active or conscious about history and debunking myths.

"Because it's native people, it's accepted and it's been done for so many years, people think (it's) no big deal," Bonspiel said.

"But we see everything wrong with it."