In response to the Grand Ronde chairman's defense of Indian mascots, I posted the following:

Our school has decided to call ourselves the Grand Ronde Indians. Below is our new mascot: a brave and noble warrior.

If you think it's a racist stereotype, don't worry. It's an honor...trust me! 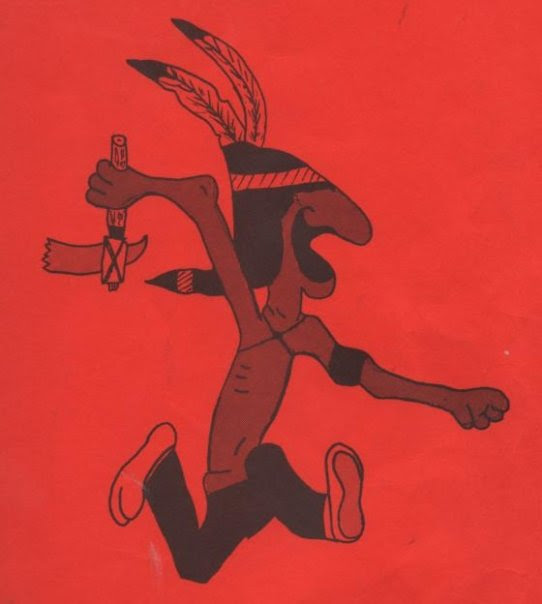 Some people didn't get or like my little spoof. One in particular:You didn't have a chance? What's stopping the council from passing a resolution now? Or holding a press conference? Or writing an editorial the way Chairman Leno did? And saying they disagree with him or whoever's responsible?

I'm offended that your chairman is continuing to stereotype 5.2 million Natives. How about we do something about him, since he is the problem? Such as one of the responses I suggested. Rather than criticizing me for criticizing him?I was spoofing Leno's belief that Indian mascots are noble warriors. Saying Leno is a jerk or whatever doesn't tell us anything about his belief. To mock his belief, I have to generalize about Indians the way he did.

I think my intent was clear, but now I've stated it explicitly: I was mocking Leno's position, not the tribe as a whole.

"You criticized and grouped all members as having the same view." Incorrect. I didn't say anything about the views of other Grand Ronde Indians in this posting. This is my view of Leno's view of Indians and nothing else.

So it's not a priority to you that Native kids around the nation are suffering because of mascots? Well, it's a priority to anti-mascot activists. We're not narrowly focused on our own interests; we're focused on all of Indian country.

How long would it take you to write a brief statement denouncing Leno...a minute? Why don't you do it so we can see your concern about this issue?

By Reyn LenoThe Grand Ronde tribe...not him personally. If he doesn't speak for the tribe, you can set the record straight here and now. Give us a statement that he's wrong and we'll publicize it for you.

Another critic joined in:I've posted about a thousand alternatives to this "insult" in this and other forums. The question is why not use this tactic once in a while to stir things up.

How exactly is this different from the numerous comments calling the Grand Ronde tribe "sellouts," "greedy," "corrupt," etc.? I must've missed all the criticism of those attacks and insults.

Are direct attacks and insults okay but not indirect ones? What can we say or not say in pursuit of social justice? Spell it out for us, please.

A few people took my side against Leno:There you go. See, that wasn't hard.

Of course, a tribal member could suffer retribution from a powerful chairman, but there are ways to speak anonymously. As far as I'm concerned, silence isn't an option.
Posted by Rob at 12:30 PM