Organizers of the B.C. music festival say they're overwhelmed by the international reactionIt's not OK to wear a Native American headdress at this Canadian music festival This means war: why the fashion headdress must be stopped

The Native American headdress is a common sight at festivals. It has also been appropriated by fashion brands and stars such as Pharrell Williams. But many are now fighting back against what they see as a crude act of racial stereotyping

By Drew Hayden TaylorComment:  Just look at the guy in the first photo. Between the sunglasses, the tattoo, and the smile, this is a portrait of smug satisfaction. It's a fine example of white privilege in action.

With the campaigns against Indian headdresses and mascots, people are finally starting to think about how they stereotype Natives. I'm not sure we're near a tipping point yet; we probably still have a long way to go. But in a few decades, we may reach the point we've already reached with blacks. Namely, that portraying them as savages or subhumans is wrong--even if people keep doing it. 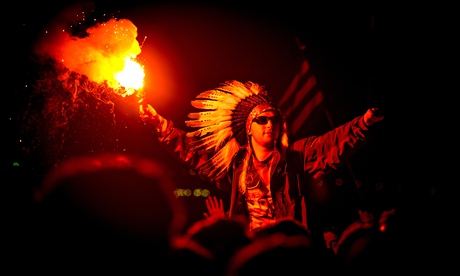