With the Batman series finally being released on DVD, it's a good opportunity to look back at one stereotypical two-parter. Here's how it starts:

The Great Escape/The Great Train RobberyComment:  A Plains Indian in traditional clothing with a phony name played by a non-Native actor...that was par for the course in the 1960s.

True, some dramas, including Westerns such as Bonanza, had begun to address the problems. Even comedies such as The Munsters were giving Indians a slightly modern edge.

Other than including an Indian at all, there doesn't seem to be much to recommend Batman's treatment of Indians. Other shows were just as bad. 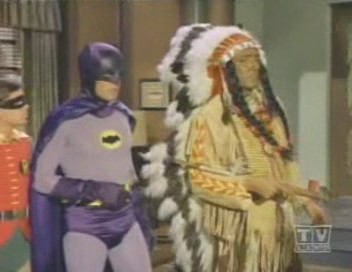