Last night's episode of Castle, Times of Our Lives (airdate: 11/10/14), featured the long-awaited "Caskett" wedding. This happy event came about because of a mystical Native artifact.

Here's the story with the Native aspects noted: 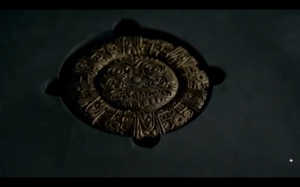 The mystical Native artifact is a well-worn plot device. It's stereotypical, of course, since real artifacts don't have supernatural powers.

Why don't European artifacts have as much magic as Native ones? Because Native cultures are more fantastical and unreal--at least to us.

At least Castle tried to link the artifact to the Inca religion--claiming it was a portal between universes and not just an evil talisman created by a shaman's curse. And the disk actually resembles the Inca's golden sun disk. As Wikipedia explains:

IntiSo an actual Inca artifact, more or less, was used in this story. That's almost enough to make the gimmick acceptable. One article claimed Maria Sanchez was "a notorious stolen-artifact smuggler." Turns out she's stealing artifacts to repatriate them, which is a better cause than stealing them for profit. So the Latina or indigenous criminal is actually a good guy of sorts. Nonstereotypical minority characters aren't uncommon on TV, but it's always good to see another one.

Anyway, this wedding episode was good if not great. Even though I guessed the bad guy the moment I saw him, as usual.
Posted by Rob at 11:00 AM