Whether I read the comic book or this summary, the story initially makes little sense. But I'll try to summarize it.

Swamp Thing has been sent bouncing back through time. He's now trapped in a crystal in the Old West in the year 1800.

The former Tomahawk is now a middle-aged tax collector, weary and cynical. His old foe Gerald Shilling, a master of disguise, takes him to a slave ship to collect its tax. It's not clear what Shilling has planned for Tomahawk, or why he'd help Tomahawk do his job. The only hint is that Shilling is playing some sort of role he isn't aware of.

Meanwhile, Moon Fawn and Wise Owl paddle to the ship and hides a crystal in Tomahawk's rowboat. It's not clear what they're doing either, except perhaps fulfilling some prophecy. When Tomahawk returns to his boat, he discovers the crystal and realizes who Shilling is. After a battle involving magic and a giant bat, Tomahawk gives the crystal--now attached to Shilling's arm--back to the Indians.

About all the Indians have accomplished is to meet Tomahawk when he's in a proper frame of mind. Oh, and to convert the crystal without a hand into a crystal with a hand. Which I guess is part of the prophecy.

From a Native perspective, the last six pages are the most interesting part. Tomahawk says he's tired of city life and wants to return to the wilderness. He accompanies Moon Fawn and her people as they travel west, growing sharper and fitter as they go. Eventually, he and Moon Fawn fall in love and give birth to a boy Hawk. Tomahawk also uses the crystal hand to free Swamp Thing and send him through time.

Years later, Tomahawk's son Hawk stars in the Hawk, Son of Tomahawk series. Hawk writes an autobiography that ends up in the hands of Abby, the girlfriend and wife of Swamp Thing. And the circle is complete, or whatever.

Basically, this issue provides an origin for Tomahawk's later years and for his son Hawk. Since I'm not a big Tomahawk or Hawk fan, I don't know if Hawk's first appearance in Tomahawk #131 covered his history. It may have mentioned his father's journey west, but I doubt it explained how Swamp Thing brought Tomahawk and Moon Fawn together.

Moon Fawn and Wise Owl, sister and brother, are generic Indians all the way. When we first see them, they're wearing buckskin outfits and paddling a canoe. Wise Owl has a headband with feathers in it.

The cover below shows Moon Fawn in a sleeveless dress, but she was more demurely dressed in the story. The hint of sexiness is only a cheap marketing ploy.

Tomahawk and the others go west to the Indians' home in Echo Valley. It's a village of tipis, of course. Chief Grey Elk is the father of Moon Fawn and Wise Owl, of course, and wears a feather bonnet, of course. So Moon Fawn is a typical Indian "princess," though the story doesn't call her that.

The names Moon Fawn and Wise Owl may be the most stereotypical thing about them. Could their names possibly be more of an on-the-nose clicheé? She's soft like a fawn; he's wise like an owl. Get it?

Fortunately, the Indians don't engage in war-whooping dances or other "savage" practices. They don't go off half-naked or in warpaint. In their brief appearances, they seem like real people.

This was a common approach to depicting Indians in the "relevance" era of the 1960s and 1970s. They weren't mindless savages anymore; they exhibited some measure of humanity. But they were mostly generic Plains Indians with no distinct culture or religion. Not terrible, but not great either. 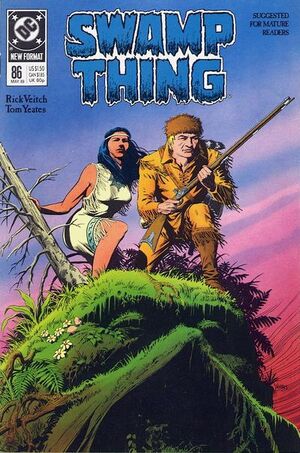