The new CW TV show Crazy Ex-Girlfriend is good. Here are a couple of reviews that capture its quirky qualities:

For Newspaper Rock, the relevant issue is the character Darryl Whitefeather:

The problem is that he's 1/8th Chippewa, or so he says. This leads to several stereotype problems:


You can watch a video about Darryl Whitefeather, with glimpses of his first appearance, here:

As with his "Whitefeather" name and "Chief" title, his office is within the realm of possibility. A small percentage of people who claim to be Native will go overboard with displays like this. They're presumably overcompensating to banish doubts about their authenticity. 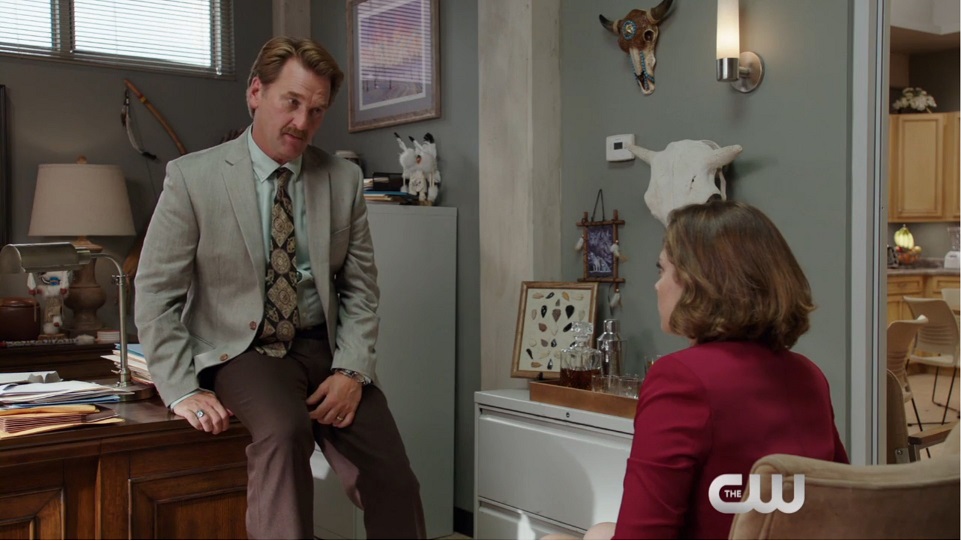 Darryl and Rebecca comment on the wolf paintings, so it's not as if the kitsch goes unnoticed. But that's it for the Native commentary. And that lack of commentary is a problem.

That's what's missing from this caricature of a character: someone who explicitly says it's wrong. When Darryl makes a thoughtless Jewish comment, Rebecca pushes back against it. But no one challenges Darryl's "Native" gimmickry the same way.

Without that, what are viewers supposed to think about Darryl the 1/8 Chippewa? Is he a real Native who's overcompensating? Or a "pretendian" who's trying to pass a la Ward Churchill, Johnny Depp, and Elizabeth Warren? There's no way to tell because the situation is unclear and no one clarifies it.

There's a huge difference between satirizing a real Indian and satirizing a phony one. Someone needs to take a stand re Darryl if this subplot is to continue. Michael Stivic noted Archie Bunker's foibles on All in the Family and that kind of response is needed here too.
Posted by Rob at 3:30 PM