The publisher or someone sent me the first issue of Mandala, a new comic-book series. They did it because they think Blue Corn Comics is a retailer, not a publisher. Wrong!

Anyway, Mandala features a Native subtext, so it's worth a look. Here's the official site:

And a couple of reviews:

Angels, shamans, mandalas, Tarot, prophecies...if that sounds like a New Age mishmash to you, you probably have the right idea. I'd say the above descriptions give you a fair notion of how sprawling and mixed-up the story is.

In the story's centerpiece, we meet Mary Lozen Many Colors and her grandfather Charlie Many Colors--both supposedly Hopi. First, the names...oh my!

For starters, Lozen is an Apache name, and the Apache were traditionally enemies of the Hopi. It's unlikely that any Hopi would use the name Lozen.

Then there's the last name Many Colors. Really?! That's even worse than the usual stereotypical names such as Grey Wolf or White Eagle. It reeks of trying to give the Hopi a multicultural flavor--as if they represent all the "multicolored" tribes of the world. In other words, pure New Age claptrap.

FYI, real Hopi names include Honanie, Humetewa, Masayesva, Selestewa, Batala, Talayumptewa, and Keevama. You can see they follow a style that does not include English phrases such as "Sitting Bull" or "Crazy Horse." The "Many Colors" kind of name is found mostly among Plains tribes, not Southwestern tribes. 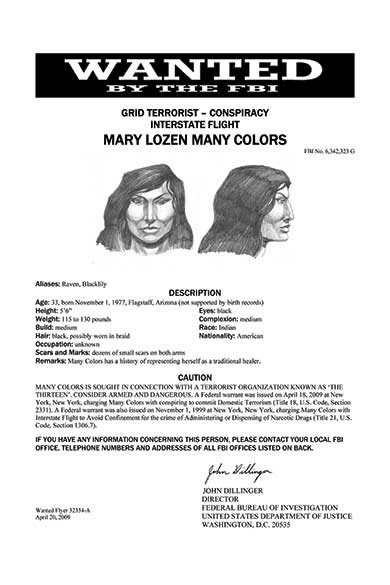 Michael and Mary materialize on the Hopi reservation--to find themselves in an Anasazi-style dwelling under a cliff. No. The Hopi's ancestors used to live in such dwellings, but that was 800 years ago. Such dwellings are uninhabited ruins now--protected and off-limits. And there are no ruins this well-preserved on the Hopi rez.

The whole concept conveys the unavoidable impression that the Hopi people are prehistoric, not modern. Even the furnishings visible in one panel--a wooden chair and cot--could be pre-modern. There's no hint that the Hopi have done anything since the 18th or 19th century.

Then Charlie, Michael, and Mary descend a ladder into what could be a giant underground kiva. Let's hope it isn't one, because that would be a gross violation of Hopi religion. No one's supposed to know what happens in a kiva except the Hopi themselves.

What they actually find isn't a Hopi shrine, but rather a warehouse of religious icons from around the world. Including an Aztec sun stone, a Plains headdress, and a phony totem pole: 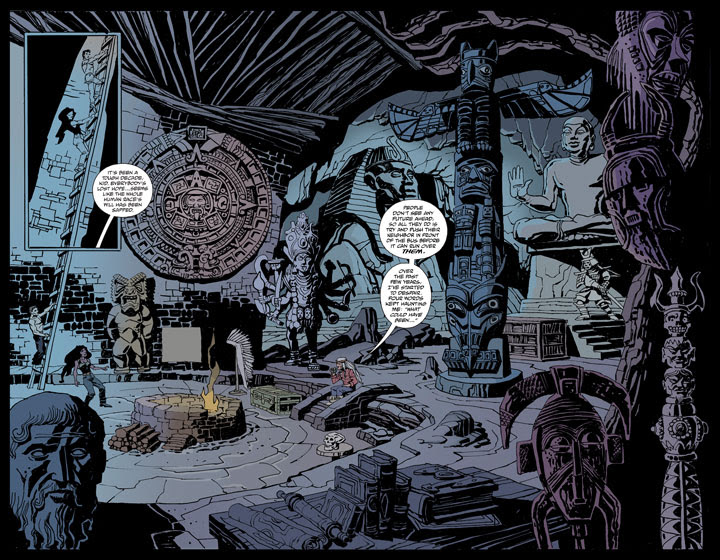 The message is that non-Western and indigenous religions are somehow related--part of the "nexus" or "multiverse" or interdimensional whatever. That they're not complete, standalone religions like Christianity, Judaism, and Islam. Instead, these religions are exotic, unfathomable, and otherworldly--perhaps literally. They're part of some vast, mysterious, cosmic sphere beyond the comprehension of modern minds.

This is a classic New Age belief, and it's an insult to all these religions. They're not exotic or unfathomable to their adherents. They don't require blood or virgin sacrifices to demons in the middle of the night.

Really, they're no stranger than the religions we're familiar with. To hide them away in an underground vault as some sort of dark secret is badly stereotypical. It's an Indiana Jones mentality from the racist era of tomb-robbing--but people should know better in 2014.

In a later issue, a Hopi sun god (below) leads the other "ancient" gods in holding hands and singing "Kumbaya." Or something. But don't expect the Christian God to show up and join them. Unlike these "mythical" gods, he's "real." 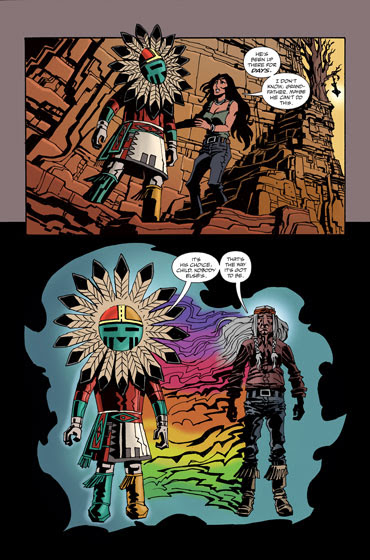 As the kicker, Charlie mentions a Hopi legend that a "true white brother" will appear to lead the everyone into the light. Yes, it's the "white savior" complex, uttered explicitly by a Native character, in 2014. Save us, Great White Father and Jesus Christ substitute! Only you are strong and brave and true enough to conquer evil.

I believe the Hopi do have such a legend. But it's one of many legends, not all Hopi believe it, and they certainly don't emphasize it. Author Stuart Moore easily could've avoided it and chosen some other legend to use. Instead, he's invented a pretext for why a white men should lead the "Thirteen," who are mostly nonwhite characters from non-Western cultures. Another white American to the rescue...yay!

I get a strong impression that Moore knows little or nothing about Native cultures. He probably skimmed a couple of books or websites before putting together this muddled stew of Hopi and Native lore. The result isn't much different from what you could read in any bad comic from the mid-20th century. If the scary masked figures and statues came alive and tried to kill our heroes, I wouldn't be surprised.

Like the previous image, the scene below wasn't in the issue I read. But it tells you all you need to know about Moore's ignorance. A Hopi "shaman" in a Plains headdress fighting a demon with a tomahawk: pure supernatural pan-Indian stereotyping. 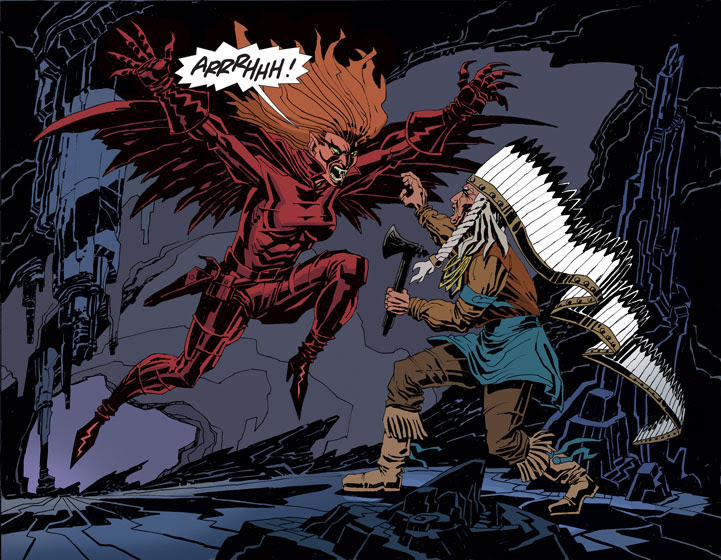 This is something I might've done in the first few months of putting together my Peace Party comics. But I soon realized how much I didn't know and kept studying. It was only after years of research that I felt I had a solid concept that didn't violate or trivialize the Hopi culture.

If I were Moore, I'd go back to the drawing board and start over. But he's invested too much time and energy in this venture to do that, of course. So we're left with another wrongheaded take on Native cultures in comics.
Posted by Rob at 3:07 AM