A new image of actress Rooney Mara as Tiger Lily has people wondering:

Eric Haywood ‏@Eric_Haywood
Something’s odd about this new Peter #Pan movie, but I just can’t put my finger on it. #TigerLily 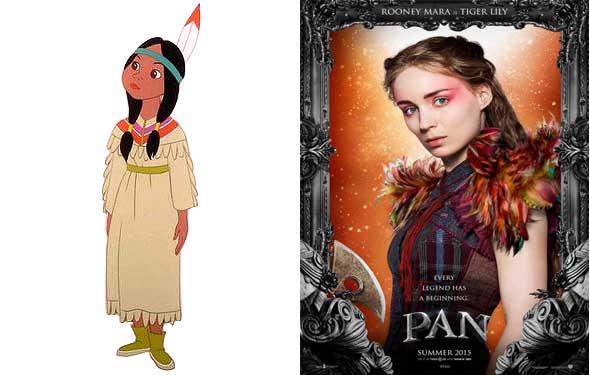 Here are some excellent analyses of the ongoing problems with the upcoming Pan movie:

Rooney Mara's Tiger Lily Could Not Be Less Native. That's a Problem.

How 'bout we all pan NBC's PETER PAN and Warner Bros PAN, too

Comment:  Even if all the "tribal" actors are white, the feathered costumes make them look tribal. Mara's ridiculous headdress makes her look tribal. That plus the spears make the tribe look primitive and savage. Even if they're white, they're strange and exotic--exactly what you don't want to see in a depiction of tribal people.

The "bravest warrior" line may be an exception. But if the creators are sticking to the original story, it suggests a huge problem. Tiger Lily starts as a helpless damsel in distress; she ends up worshiping Peter Pan. Here's a key passage from the original book:

Peter Pan--Chapter 10If there's even a hint of white-worshiping tribespeople in the Pan movie, look out.

For more on Peter Pan, see Tiger Lily in Peter Pan: An Allegory of Anglo-Indian Relations.