For a longtime Star Trek fan like me, this was an unfortunate day.

It would be illogical to mourn Leonard Nimoy's death, so we shall celebrate his life instead. 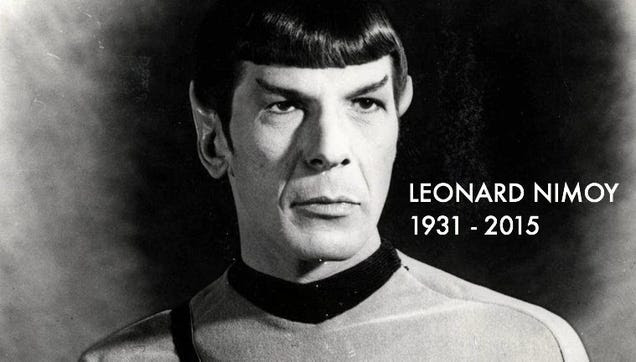 By Alessandra StanleyHe lived long and prospered. And taught us that being cool and logical could be a way of life. Or as I tweeted:

Everybody who learned to be more calm, rational, and logical from Leonard Nimoy's portrayal of Spock, raise your hand. ‪#‎LiveLongandProsper‬

Leonard Nimoy Showed Us What It Truly Means To Be Human

A 1999 column about Trek notes how the original series worked because of Shatner and Nimoy.

The trouble with “Trek”

Plagued by falling ratings, rampant merchandising and a boss who hates the franchise legacy, the noble "Star Trek" faces the indignities of age.

President Obama Releases Statement On Leonard Nimoy's PassingSide note: Obama exemplifies why Spock would make a good ambassador but a bad politician. You want Kirk making the decisions with advice from Spock, not the other way around. When Spock makes the decisions, they often fail because they're too "logical."