A famous episode of Seinfeld featured a Native subplot. The video below shows the Native scenes:

The four main characters sometimes had a reactionary attitude toward woman and minorities.

By Sola AgustssonAnd:Comment:  I wasn't a regular Seinfeld watcher. This episode reminds me why. It's mostly obvious and unfunny to me--not worth watching. I'd give it more like a C- than an A-.

Superficially, this episode's Native portrayal is fine. Winona is a modern Native woman--no different from Elaine or her friends. When Jerry unveils the cigar-store Indian, she leaves rather than saying anything. She gives Jerry a couple of chances to prove himself. After the cigar-store Indian and three verbal blunders, she finally gets mad. So I wouldn't even call her "overly sensitive" as Agustsson did.

Jerry blunders and we laugh at him for it. But it's more like laughing at an adorable "bad" boy who made an "innocent" mistake. He almost crosses the "PC" line and says something "scandalous"--but not quite. It's like we're laughing at social conventions for forcing him to be careful. And not at him for his demonstrated insensitivity and ignorance.

And even in this nominally "good" episode, you can discern Jerry's patronizing attitude toward minorities and women. He doesn't attempt to learn anything about Winona or her background. His only interest seems to be in her appearance. You can bet he'd never leave his comfort zone for her. Never visit her home reservation or even read Bury My Heart at Wounded Knee for her. Too much negative stuff for a shallow guy like Jerry. 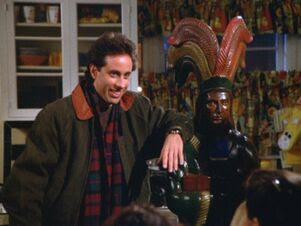