Someone told me about the cartoon character Long Shadow a while ago. Last year, I saw the three episodes of Justice League Unlimited in which Long Shadow appeared. Here's the story on him:

Long ShadowComment:  There's a lot to like about Long Shadow. For instance, his name evokes the natural world without using a cliché such as "Big Bear." His costume is futuristic but still Native-style in color and design.

As the "History" section indicates, the best part is his refreshing personality. He wasn't the stoic or savage member of the Ultimen. In fact, he was the opposite: friendly, helpful, and open about his desire to be a hero.

That doesn't seem like much, but it's surprising how often a Native character is some variation of stoic and savage. It's the 21st century, people. Indians are extroverts and peace lovers like everyone else. 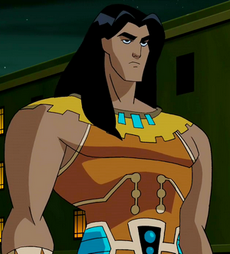