The title of this piece isn't quite accurate. It should be something like "Dozens of Shockingly Racist Scenes in 5 Famous Superhero Series."

Many of the scenes are from the World War II era, when Americans were fighting the Germans and Japanese, so the racism is somewhat understandable. A few are from the ignorant but well-meaning 1960s and 1970s. In a couple of cases I don't agree with the author--such as the X-Men's use of racial slurs to argue against racism.

Racist and stereotypical depictions of Indians make more than their fair share of appearances. Let's take a look:

And yes, a buffalo on the Apache reservation is fairly ridiculous. It's theoretically possible but extremely unlikely.

Comment:  Seanbaby criticizes other portrayals in the Marvel Family comics, but not the Native portrayals. The Native examples are sidelights, and they're self-explanatory.

Unfortunately, it's still not uncommon to see Native characters wearing headdresses and buckskins, or half-naked, or both. Yes, even in the 2010s. For instance, Grant Morrison re-introduced Chief Man-of-Bats, the Native Batman, a few years ago. (Man-of-Bats may have debuted in the Batman story pictured above.) 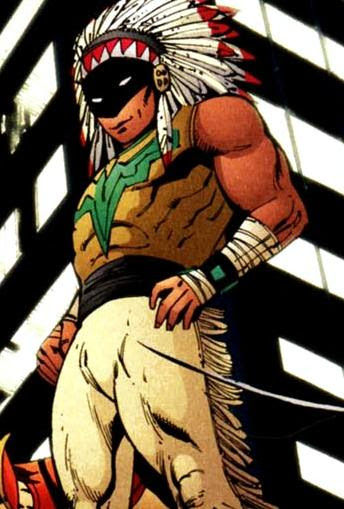