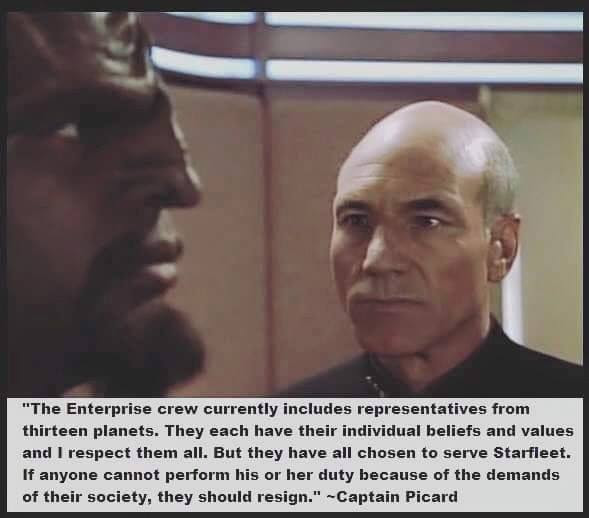 This image led to a Facebook discussion about the Federation's diversity or lack thereof:

Only 13? Doesn't the Federation have hundreds of worlds?"We are proud to include crew members from the light-skinned humanoid planets. As for the Andorians, the Tellarites, and the Orions--not to mention all the non-humanoid species--alas. Through no fault of their own, they don't quite have the 'right stuff.'

"But fear not. Some of them have their own ships in Starfleet II, aka Starfleet Jr. Others are free to hitch rides via Starfleet Uber. We make sure all species and races have equal access to the stars."Every Starfleet vessel ever shown was an Earth vessel.Which is why Picard said, "We are proud to include crew members from our light-skinned humanoid planets."

You're explaining the reasons for my initial comment, which I already knew. But you're not giving us any reason why a fictional universe should be so Anglo-American.It would've been easy to find 10 Asian or African actors in Hollywood and make an Earth-based starship primarily nonwhite. So the real reason here is racism. Which is my point.It's sad but true, alas. And 20-30 years later, when producers could've and should've known better, Starfleet was still predominantly white.

However, bigots like Kim Davis aren't welcome in Starfleet, so that's good.

I just think it's funny that Picard would use 13 as the measure of Starfleet's diversity. Like, "The US military has members from 13 (thirteen) countries. The other 183 countries aren't represented, but you can't have everything."It has naturalized citizens from other countries.Okay.

Point is that "members from other countries" doesn't mean "citizens of other countries." "From" mean they or their ancestors originally came from elsewhere. Obviously.

For more on Star Trek, see Is Captain Kirk a Conservative? and Miramanee in Star Trek Continues.
Posted by Rob at 8:28 AM