If Churchill is guilty, so is everyone 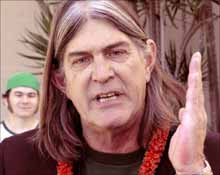 Actually, the blog comments following the article are much more insightful and enlightening than the hackneyed argument presented by the author.

I'm so weary of "idealogues" on the far right and far left screeching from on-high about the sins of their perceived "enemies." How about looking at reality once in a while, folks? You might find that your adversaries might...God help us...have a point once in a while! But that wouldn't fit into our tightly knit preconceptions now, would it?

Yep. Close-mindedness runs amock among the chattering class. Maybe that's one reason so many saner, more reasoned thinkers have tuned out, which is too bad.

I enjoyed the comments too. Here are some of them:

* Desperate times may call for desperate arguments, but Churchill should hope that his legal team can come up with more than his pr machine.

* The refusal to even admit the documented misconduct in this case only proves the need for outside intervention to effect academic reform. This piece reads like parody.

* The premise here—"Research misconduct is in the eye of the beholder"—is faulty and thus makes any argument that follows highly problematic.

* Lest you believe this teacher is picking on you as part of a right wing conspiracy, I will mention here that I don’t disagree with your historical notes. Nevertheless, your argument is irrelevant to the issue at hand.

* “Where are the defenders of academic freedom and tenure when we need them most?”

Firing frauds like Churchill, who threaten the very foundations of academic inquiry.

On the other hand:

* IMHO, Witherspoon is allowing Churchill to defend himself on the merits of his specific “research misconduct” case. The point of the piece is to reiterate the negative connotations that “the firing of Churchill reveals a very pernicious kind of exclusionary dogmatism in scholarly research and writing and media reporting.”

Only one comment deals with this statement/argument, and to use the IRA government approval model, silence is agreement. Instead, commenters “mentally masturbated” by playing to their academic skill sets or noting the political/economic role a section of America plays in this controversy.

Writerfella here --
Al Gonzales has a better chance of keeping his job than does Churchill, if only for one reason. Gonzales' topic is at the forefront of the news, where as Churchill's topic is page 37 at best, IF AT ALL. Sorry, but that is the lay of the land as it currently exists. Academics far are less important than politicists, if only because there are more of them...
All Best
Russ Bates
'writerfella'