Someone asked me if I'd give SCALPED another chance, so I've read it through #6. I'll grant that there's less violence and more characterization in #4-6. We've gained more background on Bad Horse, and Red Crow merely seems bad, not evil incarnate.

On the other hand, the characterization is mostly a rehash of Wounded Knee II, with Red Crow and Dashiell's mom as stand-ins for the actual participants. In fact, it's a pretty straight ripoff of the Leonard Peltier case. This may be news to many readers, but it's old news in Indian country. It's not representative of what's happening on reservations today.

Bad Horse's soft-core affair with Red Crow's daughter is also unsavory. She's as voluptuous as a Playmate, a perfect male fantasy, totally unlike most Native women. There's an extremely long history of Native women as sex objects and Aaron is continuing the tradition.

Again, other than a few Native phrases and the fictionalized Peltier case, there's no Native culture or history here. Judging by Aaron's dark version of the casino opening, he doesn't have a clue what goes on in tribes. And what about the stereotypical covers?

Despite the bits of characterization, I'm getting less interested in the story as it goes along, not more. Bad Horse and Red Crow have become one and a half-dimensional rather than one-dimensional, but that's nothing special after six issues. At least the first couple of issues had the advantage of being fresh, bold, and unexpected, but that advantage is gone.

In short, I don't think I'll be spending more money on what, to me, is a middle-of-the-pack comic. The Sopranos was rich and deep from the start, while SCALPED has been Tarantino-lite. When Red Crow goes to a psychiatrist and begins questioning his beliefs, then maybe I'll take SCALPED seriously as a work of fiction. 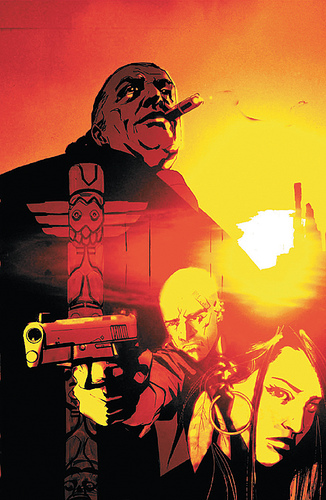