Medicine woman in The Simpsons Movie

Saw The Simpsons Movie Sunday night. It was about as good as everyone's saying: the same humor as in the TV show, but noticeably better animation. Rob's rating: 8.0 of 10.

Of particular interest was Homer's encounter with a Native woman, who finds him after he wanders off into the Alaskan wilderness. She takes him home and revives him with a fiery brew. Then she guides him to his preordained destiny: to return to Springfield and save the day.

The scene includes some good and not-so-good bits of Inuit and Native Alaskan cultures. Since the woman doesn't identify herself or her ethnicity, she may belong to one or both cultures. Perhaps she's consciously mixing the cultures.

The details [stop reading if you don't want to spoil the scene]:

The Simpsons team could've mixed the Inuit and Native Alaskan bits intentionally to make a point about cultural synthesis. More likely, though, they did it heedlessly--using everything they could think of to create a pan-Alaskan sense of "Nativeness." It would've been better to make the medicine woman Inuit or Native Alaskan, since they aren't the same thing.

At least they didn't stick her in an igloo or have her act "primitively." The hut and its artwork convey a certain sense of sophistication. If she's a traditional Native who lives alone for some reason, her life looks comfortable and secure.

As I said, the scene is something of a mishmash. The show previously evinced some sensitivity to Native concerns, and the movie continues this hit-and-miss sensitivity. It could be a little better, but it also could be much worse. 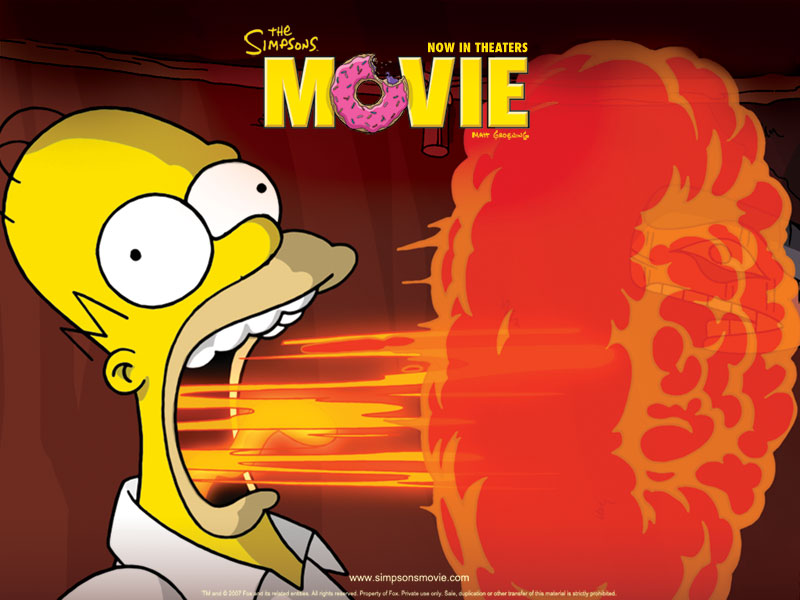 Selma may be man-happy (she has had five husbands), but Patty is a lesbian.

Yeah, yeah. I think Patty made lusty remarks toward men before she came out of the closet in 2005. We know she dated Principle Skinner once, and I'd say she's clearly lusted for MacGyver.

In short, I believe she's acted man-hungry on occasion even if she's a lesbian.

I haven't had a chance to see it yet but my friends said the woman was a "Tinglet"? (Which seems to be a common mispronunciation of Tlingit.) I wasn't sure if my FRIEND was just saying the character was Tlingit or if it was at all mentioned in the movie and maybe you missed it, if they did in fact say Tinglet.

I'm pretty sure no one in the movie identified the woman's tribe.

"As Homer leaves, her ghostly image appears in the Aurora Borealis and urges him on. This bit wasn't original when it occurred in The Lion King and Brother Bear and it hasn't gotten any fresher."

This was done to great effect in the episode on the death of Bleeding-Gums Murphy, which was one of the best episodes.

Cookie Kwan is another one of hte "man hungry" Simpsons women characters.