Review of The Sinister Pig

As we headed into the Four Corners area--i.e., Hillerman country--we started listening to Hillerman's The Sinister Pig on CD. I've read about half of his books and this was by far the worst one. My girlfriend the English teacher agreed, so we gave it up after five chapters. (We could've called it quits much sooner, but we gave it a generous chance.)

As far as I'm concerned, the following comments from Amazon.com sum up The Sinister Pig:Rob's rating:  2.5 of 10. 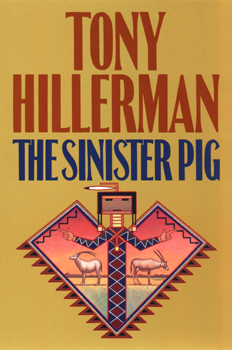 Writerfella here --
THE SINISTER PIG now is several years old but it certainly revealed that Hillerman is, 1. getting old; 2. coasting on his best-selling history; and, 3. proving that he has gone to that particular wellspring too many times. writerfella elsewhere in this blog has noted that Hillerman, being Caucasian, cannot think like a Native American and thus his Native American characters also cannot so think. He does have Native technical advisers now to keep his facts and information straight, but that's about it. He's done...
All Best
Russ Bates
'writerfella'

As I trust you know, I review old movies, books, and comics as well as new ones.

I didn't assume anything, since you explicitly wrote that Hillerman can't write Native characters and is "done" as a writer. Or are you saying you like his work (including The Sinister Pig) even though it's no longer good? I wouldn't put this conclusion past you since your critical abilities are sadly lacking.

If you're not too afraid, try answering the question this time. Or watch me continue to point out your silly contradictions.