Drew Barrymore in a headdress

Actress Drew Barrymore posted this as her Facebook profile picture for a day: 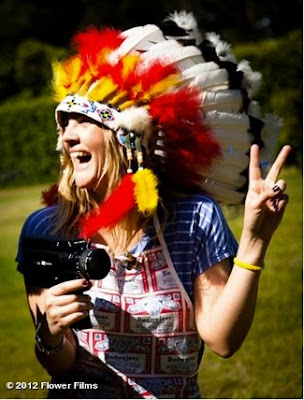 So much for her sensitivity to the Native POV in the movie Big Miracle.

People shared this pic and it generated a flurry of negative comments. For instance:In one case "Cory," who claimed to be Native, defended Barrymore. I didn't see his comments, but I believe he said Barrymore was trying to connect with Natives and critics were overreacting. This generated a few choice responses:Another hipster headdress

Soon Adrienne Keene weighed in in her Native Appropriations blog:

Inevitably, some people accused Indians of playing the victim card, crying over the past, etc. My response to that:

It's funny that some people don't understand the difference between saying "this is wrong" and "poor us." They're two separate and almost unrelated things.

Is it also playing the victim card to note that 2 + 2 = 4, not 5? Pointing out a problem--a clogged toilet, a hungry child, or a misappropriated headdress--doesn't mean you're crying over it. It means you're trying to fix the problem and thus make the world a better place.

The good news is that Barrymore--or her people--removed the photo within a day or so. Once again, protests work. It's a good guess that she won't appear in a headdress again anytime soon.

For more on the subject, see Top 10 Native Fashion Misappropriations and Racist Costumes = White Privilege.
Posted by Rob at 6:11 PM

Email ThisBlogThis!Share to TwitterShare to FacebookShare to Pinterest
Labels: chiefs, protests, Stereotype of the Month, stereotypes

she (or whoever running the page) removed the photo... along with the comments that referred to her previous photo of the headdress and beer apron. At this point, it's like it never happened. She hasn't apologized yet either.

Why can't she apologise, we all screw up, why is saying sorry so hard for some people.

As an aside Rob, one of those comments is mine. Woot ^_~