A review of the book Roger Williams and the Creation of the American Soul. It notes his belief in the separation of church and state and his attitude toward Indians.

By Joyce E. ChaplinComment:  For starters, Williams recognized the existence of Native land rights. This is something Americans are still stupid and ignorant about centuries later.

Equally important, he recognized the existence of Native religions. He felt Anglos had no right to forcibly convert Indians to Christianity.

Together, these beliefs refute the usual reason for excusing Euro-American genocide: that people didn't know any better then. That we can't judge them by our moral standards.

Of course they knew better, and of course we can judge them. Williams, Las Casas, and others recognized the crimes against Indians at the time. Nor was this some incredible feat of advanced thinking. It came straight from the Biblical injunctions not to kill, steal, or cheat. Anyone who wasn't a greedy, selfish hypocrite would've realized Christianity forbid harm to Indians.

But Williams wasn't flawless--as you may recall from Roger Williams, Slave Trader and Narragansett Official Opposes Williams Plaque. Like most people, he was a mixture of good and bad.

Below:  "Roger Williams takes shelter with the Narragansett in 1636." (Stock Montage/Getty Images: Engraving based on a 19th-century painting by Alonzo Chappel.) 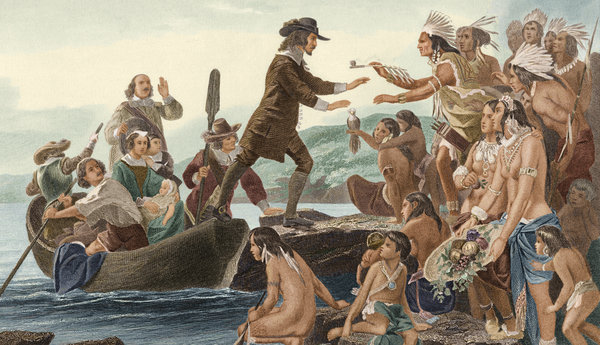