Here's a claim that got a lot of circulation around the Internet:

By Richard ThorntonAs you can tell from the URL, the article's previous title was "Massive 1,100-year-old Maya site discovered in Georgia mountians." Someone changed it when they realized how over-the-top it was.

This story quickly spread via Facebook, with people treating it as a revolutionary discovery. I disagreed. Thornton writes for Examiner.com, which means he's basically a blogger. His claims weren't supported by archaeologists and weren't presented in a peer-reviewed journal. This was nothing but an amateur's interpretation of some extremely skimpy evidence.

Some people defended Thornton because they'd heard of cultural connections between Mexico and the Southeast. Cultural connections are one thing, but a hitherto-unknown Maya citadel of stone in Georgia? That conclusion requires ironclad proof, not idle speculation.

Unfortunately for Thornton, the archaeologist he cited soon shot him down:

By Ned PotterComment:  Thornton's claims are mainly based on the word Itsate, along with the alleged similarities in the pottery and stone structures. No one else has supported any of Thornton's claims, and he hasn't presented photographs or other evidence we could inspect for ourselves. Until he does, his speculation is next to worthless.

In fact, it resembles the "ancient astronaut" claims by Erich von Daniken and the like. The mound builders couldn't have built the stone structures themselves, Thornton implies, so they must've had outside help. The only difference is that the alleged help came from more sophisticated Indians, not from visiting Europeans, Asians, or Africans.

For more on lost civilizations, see Searching for El Dorado and Beck:  Indian Mounds Are Egyptian.

Below:  "A rock formation in the North Georgia woods." (Vino Wong/Atlanta Journal-Constitution/AP Photo) 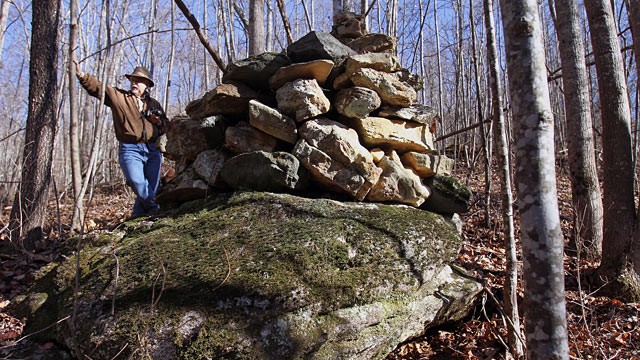