A Kick in the Gut(feld): Racism, Welfare Dependence, and FOX’s Clown Prince of Prejudice

By Tim WiseWise continues by lambasting the claim that white Americans "built it" with no help. He provides several historical examples of whites relying on others:Comment:  Ignoring the fact that the Spanish came first, let's talk about our Anglo-American ancestors. In addition to being illegal immigrants, they were among the first welfare moochers. The colonists at Jamestown and Plymouth wouldn't have survived without the Indians' help. Only after receiving free handouts did the feeble Euro-babies manage to stand on their own feet.

We can sum up this conservative race-mongering and welfare-bashing pretty simply. The GOP's fundamental racial message in this year's election is: white male Christians built it, others tear it down. White male Christians are hard-working and self-reliant. Others are needy and greedy.

If you agree, vote for Romney, who's practically the epitome of Western civilization and its so-called Manifest Destiny to dominate and rule. You know, the basic belief that white = might = right. If you disagree, vote for Obama. 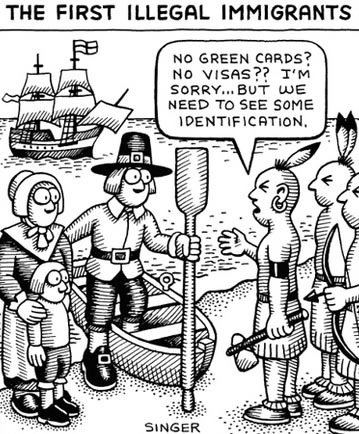 Nothing new. Actually, a drinking game might be to see every time a conservative mentions "slave mentality" or a "liberal plantation".

Oh, no, on second thought, we don't want any deaths from alcohol poisoning.

I often immerse myself in the talk of fellow conservatives. And I've never heard either phrase. In fact, this is the first time I've seen either one.