Origin of the tomahawk chop

‘Tomahawk chop’ pops up in Mass. Senate race after history in arenas, activists’ crosshairsComment:  Turner, Fonda, and Carter are as wrong as everyone else about the "honoring" argument.

If the Seminole Tribe protested the tomahawk chop, it probably would face the usual firestorm of protest. The school would try to negotiate a compromise rather than simply ban the practice. See the whole "Fighting Sioux" conflict for a good example of how it would play out.

For more on the subject, see More Racism from the Brown Campaign and Brown Staffers Whoop and Chop. 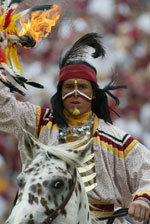