I've been watching old episodes of Star Trek: Deep Space Nine and Star Trek: Voyager. This weekend I saw Tattoo, the ninth episode of Voyager's second season. I don't remember if I saw it when it aired originally, on November 6, 1995--perhaps not.

Here's a summary of it:And some reviews:

The first two reviews touch upon perhaps the most serious problem, which happens when Chakotay meets the alien "Sky Spirits." Memory Alpha describes the scene: 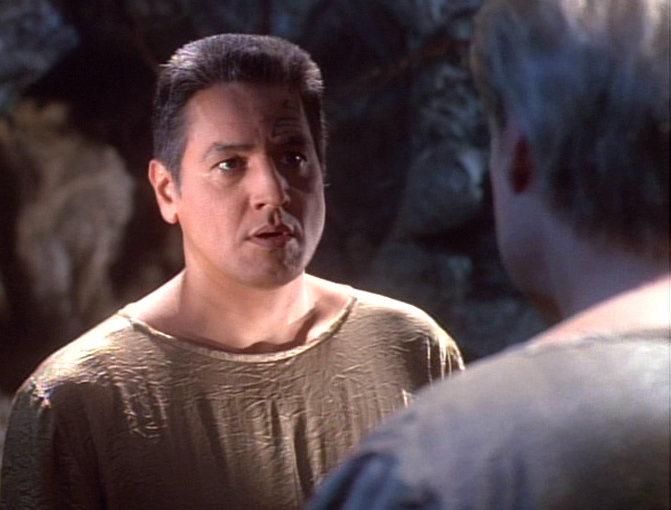 The humans lacked language and culture until the aliens gave them the "gift." This also instilled "creativity and a spirit of adventure" in the humans, leading them to cross the planet and eventually to populate the Western Hemisphere. The SF Debris video review explains:Yikes!

Nor was this "message" some sort of thoughtless mistake. As Memory Alpha notes, the writer explicitly intended it:Thus, "Sky Spirits." Because Piller just couldn't resist the ten-thousandth claim that Indians were too primitive to develop civilization without alien help. This condescending idea goes back hundreds of years, to the first explorers of the continent, but Piller found it fresh and interesting.

Tattoo has other problems besides the racist "ancient astronauts" and the lack of cultural specificity:

Some reviewers consider Tattoo a decent episode, even above average. I'd say it's bad. In particular, the Native aspects are handled poorly, at best. Only the subplot about the Doctor's infecting himself keeps the episode from being a complete loss.

For more on the subject, see Star Trek Voyager: Chakotay.
Posted by Rob at 5:00 PM