Review of Aquila in the New World

Aquila in the New World (Aquiliad, No. 1)Some readers' reviews on Goodreads:Rob's review

Let's start with the setup. The story takes place around AD 100, which we know because the sequence of Roman emperors hasn't changed. Indeed, Domitian (AD 81-96) and Trajan (AD 98-117) are supporting characters.

The Romans have exactly three new inventions, I believe: steamships, steam-cars, and bicycles. The book eventually explains where these things came from, starting with a lone scientist working in secrecy. And why no other inventions have come from the same source.

But the book fails on other questions. Why haven't the Romans reverse-engineered the steam engine and used it in other capacities? It's not as if steam turning, say, a paddle wheel is anything complex? So why haven't these inventions transformed Roman society?

It's not clear how long the inventions have been around. I think it's only a century or two. Any longer and they would've caused this world's history to diverge radically from our own.

On the plus side, the Native characters--especially Aquila and Hooting-Owl--are well-realized. As well-realized as any "Old World" characters, anyway. Even if they have "comical" names such as Equus Insanus (Crazy Horse), who isn't due to be born for another 1700 years.

These characters are relatively free of stereotypes. They don't talk or act like savages. Indeed, Aquila has a realistic capacity to roll with the punches and change with the times. He eventually becomes a respected Roman senator who wears a toga.

Alas, there's much more on the minus side.

The Romans have conquered the eastern part of North America. Their colonies are similar to what the US had in the early 1800s. Full control of the eastern seaboard, small towns along the Mississippi, nothing but a couple of forts further west.

But having steamships wouldn't have helped the invading armies. Without gunpowder or mounted troops, the Indians' superior numbers would've been telling. Even with the advantage of disease, I don't think the Romans could've won.

If they did win, it might've taken them twice as long--600 rather than 300 years--to "tame the wilderness." Rome came into existence only 850 years earlier. Could Romans conquer the same lands in Europe and Asia, plus another half a continent across an ocean, in the same amount of time? I don't think so.

I don't know if Somtow read the Cliff Notes version of Roman history, but he probably read the Cliff Notes version of Native history. He set up his alternate US to resemble the well-known, "Wild West" version of Native America. Iroquois in the northeast; Cherokee, Creek, and Seminole in the southeast; Lakota on the northern plains; Comanche, Apache, and Caddo on the southern plains; Chinook, Kwakiutl, and Tlingit in the northwest. He even gave the tribes "clever" Latinized versions of their names--e.g., Apaxae for Apache.

And these tribes had their own names for themselves, in their own languages. The "Iroquois" were the Haudenosaunee. The "Cherokee" were the Tsalagi, and so forth. Giving us Latinized versions of names that didn't exist is a silly mistake.

More important, Somtow ignored the broad sweep of Native history. Here's what was really going on in AD 100:

Mound BuildersNone of this is evident in Aquila in the New World, but it's fundamental. Great mound-building civilizations dominated America during the Roman era, but Somtow somehow missed it. South of the border

The one thing Somtow almost got right is having the Olmecs--not the Aztecs, as one reviewer said--rule in Mexico. Actually, the Olmec civilization had collapsed and the Classic Maya civilization had yet to rise in AD 100, but close enough. With a little help, the Olmecs might've lasted longer.

The Olmecs have more inventions than the Romans, including hot-air balloons, elevators, and loudspeakers. Unfortunately, it's not because they're cleverer than the Romans. Rather, an alien in the form of a were-jaguar, a revered Olmec figure, gave the Indians these gifts.

I don't know if Somtow intended this, but he basically replicated the "ancient astronauts" theory of Erich von Däniken. Namely, that non-European civilizations arose only because aliens disguised as gods gave them knowledge and technology. That they weren't smart enough to build pyramids and other monumental structures on their own.

True, the aliens also helped the Romans, but to a much lesser degree. Yet the Romans have conquered half the world, while the Olmecs are still in Mexico. The implication is that the Romans were smart enough to use their gifts properly, while the Olmecs squandered them on a despotic kingdom ruled by superstition and sacrifice. In short, the Europeans were rational and the Indians weren't.

Aquila in the New World has more Native problems, but these are some of the main points. It's not badly written if you go paragraph by paragraph. But its historical aspects are flawed and its "satire" fails as much as it succeeds.

Most of all, its premise--a mishmash of concepts embodied in the phrase "flying saucers, Sasquatch, time-traveling aliens"--is unbelievable and uninteresting. It's like a child's version of science fiction--like something you'd read in a bad comic book. Like Superman goes back in time and the ignorant savages worship him as a god--that kind of bad.

I expected more than this. If you're going to give us an alternate history, I expect some semblance of accuracy. If the South won the Civil War or the British Empire never fell, tell us how and make it plausible. 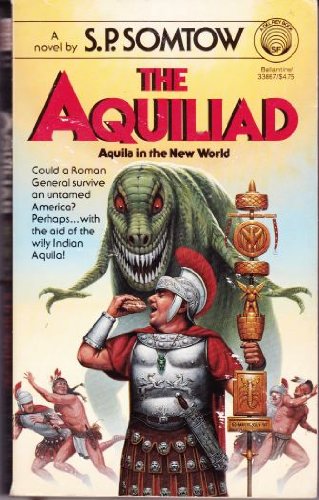