Here's a typical 19th-century confrontation in the "Wild West."

1) White settlers move into Native territory and set up permanent residence without permission.

2) Someone, perhaps a young Native warrior, steals a settler's horse.

7) Native "killers" are condemned for murder without a trial and hanged.

8) Settlers are finally satisfied that they've received justice for the stolen horse.

Repeat until the Army sends in a massive force to hunt all the Indians in the territory and confine or remove them.

The above scenario comes courtesy of Blood and Thunder, a book I just finished. It offers a revealing look at life on the southern frontier of New Mexico.

P.S. Sometimes just a dispute over a horse race was enough. Unbelievably, a stolen horse was not the worst excuse for a massacre ever. 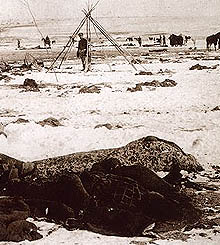