A teacher e-mailed me to say she was interested in Native ghosts. For a section of her literature class, she wanted to know about Native ghosts in comic books. I sent her this response:

There are a ton of stories in every genre--comics, movies, TV shows, novels, etc.--that feature Indian ghosts, spirits, or demons. Often they arise from an Indian burial ground that's been cursed somehow.

But these are usually throwaway stories. They're not central to the comic book, movie, or whatever in question. So it's difficult to produce a list of such stories. You'd have to search for "Indian burial ground," "Indian ghost," "Indian spirit," and so forth and weed through the false hits.

There are all sorts of variations, of course. I remember an old Tomahawk story where some Brits pretended to be ghosts to scare the Indians. Lots of wacky things like that.

As one approach, I'd suggest perusing my blog on two topics:

Most of the postings are about movies or TV shows, not comics. But they may spark your interest anyway.

As for particular comics, characters such as Alpha Flight's Shaman, the New Mutants' Dani Moonstar, the Justice League of America's Manitou Raven, and DC's Arak sometimes enter the spirit world or the dream world. That's kind of like being a ghost. You could search those series for individual issues about ghosts. For instance, try "Alpha Flight Shaman ghost." See what it pulls up.

Beyond that, I can think of a few possibilities. Most of them don't involve ghosts in the classic European sense, but they may be close to what you want:

As you can see, there are many suggestions about characters like a ghost. I don't know if that helps, but it's about all I can think of.

As for buying them, I sell just my own comics and a few others. I'd try Mile High Comics at http://www.milehighcomics.com. They have a huge inventory--possibly the biggest online.

From what I've seen, it's about 50-50 whether they have Native-themed comics such as the ones I've mentioned. But the prices for lower-quality items are reasonable.

I trust that helps! 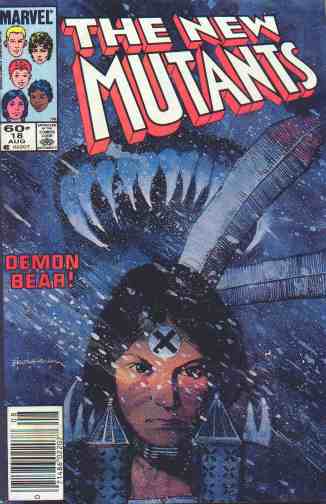 P.S. In a follow-up message, the teacher said she was also interested in Native spirits, demons, and related supernatural beings. That would increase the number of relevant comic books immensely.
Posted by Rob at 11:00 AM