Seminoles nickname not a problem at Florida State

By Eddie PellsThen there's the op/ed below. After several paragraphs of Seminole history, the writer gets to the actual mascot:

Florida State does the Seminoles proud.

By Glenn BoggsNote that he wrote "stunting," not stunning. Correct. This phony statue of a mounted warrior--the Seminoles didn't ride horses--stunts our knowledge of Native history. It makes the Seminoles into stereotypical horse-riding savages and nothing else.

These defenses of the "stunting" Seminole mascot sound okay. They've got the tribe's approval and everything. So what's the problem?

Well, Dave Zirin of the Nation explains it to us. His column is worth posting in full:

The Florida State Seminoles: The Champions of Racist Mascots

By Dave ZirinThis is the problem with all mascots in a nutshell:Below is one of the many problems that Indian mascots engender. Naturally, the mascot's defenders, including Florida's Seminole tribe, can't or won't explain these problems. 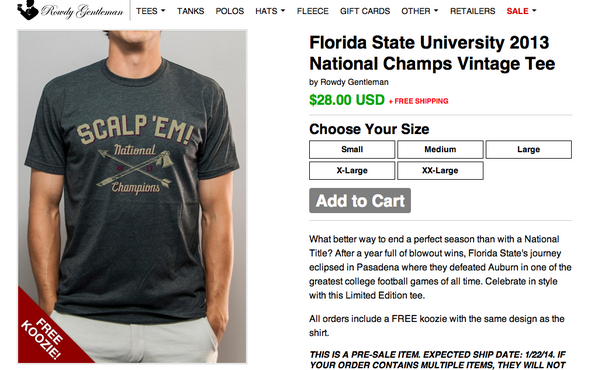 For more on the Seminoles, see EPSN's Seminole Minstrel Show and Why FSU's Seminoles Aren't Okay.
Posted by Rob at 6:00 PM