Miss Canada in a totem-pole loincloth

Miss Canada and the Free Bin 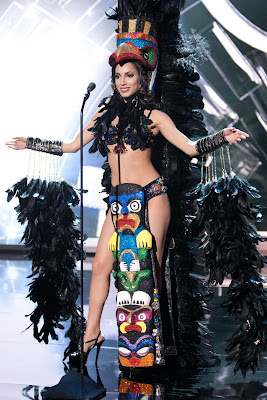 Some commenters on Facebook were more scathing than Dr. Metcalfe:Dominican totem pole?!

By Tristin HopperAnd:Comment:  Get freakin' serious, pageant people. The totem pole looks like a touristy version of typical Native totem pole. The animals appear to be an eagle, bear, and wolf--animals not found in the Dominican Republic.

Moreover, the rest of her costume resembles a giant raven--again a clearcut symbol of Canada's First Nations, not the Dominican Republic. If people realized the costume turned this revered being into a sex object, they might be even more upset.

Finally, the designer explicitly wrote that he intended to "pay tribute to the indigenous peoples of these Nations." So he lied? Or he's too stupid to realize what he said? Because his statement blatantly contradicts the pageant's statement.

For more on the subject, see Miss Universe Canada in a Headdress.