Miss Universe Canada in a headdress

Adrienne Keene is among several people who have commented on Miss Universe Canada's costume this year: Time magazine, which labeled this one of "Miss Universe 2011's Most Bizarre National Costumes," quoted a blurb:Comment:  The headdress isn't the only problem with Durocher's appearance. The werewolf-style teeth and tongue look fake to me. Indeed, the whole thing looks fake to me: like a child's arts-and-crafts version of Pacific Northwest art. I'd be surprised if a Native fashion designer had anything to do with it.

For those who are unfamiliar with this artistic style, see:

Also, I suspect the skirt is supposed to represent a teepee.

So it's an "homage" to and "inspired" by Haida art? In other words, it's some non-Haida version of Haida art. And not a good one.

Maybe one of the elementary-school children she loves created it for her. A kid saw a chief, wolf face, and teepee in an Indian coloring book and put them all in a costume.

The polite term for this is cultural appropriation. Another term might be "mockery" or "ripoff." 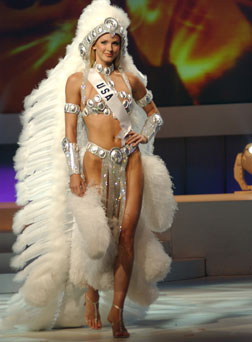 It's hard to say which of these costumes is worse. Miss USA's sexy showgirl outfit turned her into an Indian princess, fantasy figure, and potential abuse or rape victim. But Miss Universe Canada's outfit bastardizes a real culture's artwork by 1) copying it badly and 2) mixing it with the stupidest Plains stereotypes. I wonder if Durocher did a war whoop or dance to go along with her dress.

For more on beauty pageants, see Male Warriors and Female Princesses and Native Girls Judged on "Poise," Makeup.
Posted by Rob at 3:23 PM

These costumes are just ugly. People shouldn't pretend--it is not becoming; and it shows a lack of respect for their own ancestors and for ours.

To be fair, it's a beauty pageant. They're not known for their enlightened views.

Harvest/Anonymous: You mean we CAN'T transform into animals? Well, darn.