By Laurie GuthmannComment:  This article confirms what I've been saying. Namely, that "who's an Indian?" is a political and cultural question, not a biological one. That Latinos are basically mixed-blood Indians who have chosen, for the most part, not to identify with their Native ancestry.

If the huge mass of Latinos in the US started identifying as Natives, we'd really see the depth and breadth of America's indigenous roots. It would make our history of conquest and colonization that much clearer.

And that's why the white Euro-American mainstream fears and hates immigration. It's a stark reminder of our historical crimes. And a stark reminder that it's not too late to redress those crimes--to establish a more fair and just America where white people don't rule (as much).

For more on the subject, see What's the Difference Between Indian and Latino? and "Most Mexicans Are Indians." 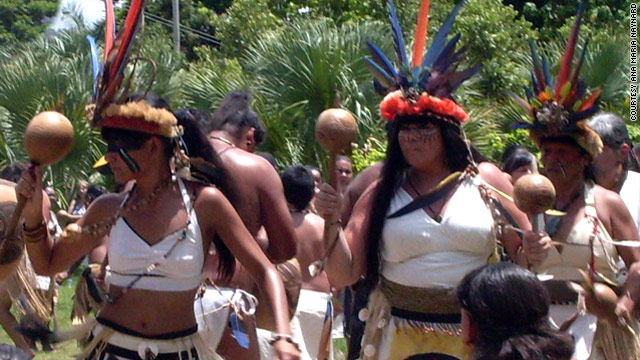 I remember what my dad said about Latinos in the early 60s and 70s about how Latinos were racists against Indians in general, now it seems they are all Aztec or something. Don't get me wrong, I praise any ties to idigenous peoples, especially the disenfranchised, but I think its fraudulent and exploitive to claim to be Indian because you think theres some kind of financial gain.

You don't have to be Indian today to be oppressed or gain moneys, just keep paying your taxes, vote for corrupt leaders, support any kind of civil disobediance, stand in line or get the door shut in yor face more than a few times and you will know what being Indian is about, but doesn't this happen to all Americans today?

Well, Anonymous, I guess it shows how things have changed.

The Aztecs have always been a major part of Mexican nationalism. If you've seen Y Tu Mamá También, you know that Tenoch's parents, in a show of nationalistic hypocrisy, gave him an Aztec name, and then (in an imitation of the U.S.) had him circumcised. There are a lot of political metaphors in that movie, beyond it being a sex comedy with the classic trickster story. (Two boys try to seduce this woman by taking her to a beach that doesn't exist. But she sees through them and is only using them so she doesn't have to talk to her husband about her cancer.)

Another thing about the Aztecs, though, is that they practiced human sacrifice. They were so gung-ho about it that the other Indians took their chance with the Spanish.

Don't forget also the "Aztlan' movement, which is a Mexican version of Hitler's Aryan 'theories'. The Aztlan racists mangle Native ideas and real history into an ideology that preaches genocide and the creation of a large racially pure homeland in much of western North America.

I feel confliceted about this. It reminds me of people in the states who suddenly find out their great great grandmother was a cherokee princess. Ana María Tekina-eirú Maynard has always identified herself as a Latino and I think she should stick with that. She doesn't even speak her native language where as there are millions of indigenous speakers in Guatemala, Peru, and Bolivia. Those shouls be the only people who should be considered native. At least they still have their native names, cultures, and language.

Maybe but what the heck is a Latino anyway? Who came up with the word and how is it really used? Even natives from "Latin America" who speak their languages and are not X-tians can still be considered non-native according to my Navajo friend because they don't speak English and were not under USA, even Canadian natives who speak French aren't native, racialization is a pretty tricky subject! "She doesn't even speak her native language where as there are millions of indigenous speakers in Guatemala, Peru, and Bolivia. Those shouls be the only people who should be considered native. At least they still have their native names, cultures, and language." SO should natives here who don't speak their language or have native names also be excluded? Isn't that what the Boarding schools were about? Keep in mind the SPanish, French and Portuguese had different methods of colonization and racializationas a result.

Your claims about Aztlán are ridiculous, DMarks. As Wikipedia notes, Aztlán is a symbol of Chicano unity, not a plan to take back the western United States and kill its inhabitants.

The concept of Aztlán as the place of origin of the pre-Columbian Mexican civilization has become a symbol for various Mexican nationalist and indigenous movements.

The name Aztlán was first taken up by a group of Chicano independence activists led by Oscar Zeta Acosta during the Chicano movement of the 1960s and 1970s. They used the name "Aztlán" to refer to the lands of Northern Mexico that were annexed by the United States as a result of the Mexican-American War. Combined with the claim of some historical linguists and anthropologists that the original homeland of the Aztecan peoples was located in the southwestern United States, Aztlán in this sense became a symbol for mestizo activists who believe they have a legal and primordial right to the land. Although most scholars, especially those who are not part of racially-based political movements, recognize that Aztlan was located within Mexico proper.

As I've said before, I think people who call themselves Native should have some ties to their tribal heritage. It could be blood or culture, but it has to be something real. Claiming you're Native because you "feel" Native inside isn't enough.