In Keep American Indian Sports Mascots, J.A. Ingle writes:Comment:  Chief Osceola portrayed in a respectful manner...except he wasn't a chief, didn't wear warpaint, didn't ride a horse, didn't chuck a spear, and didn't act savage for no reason. Other than that, the cartoon-like mascot totally respects the real Osceola.

I'm sure the creators of minstrel shows said they were being respectful too. "But we love our darkies!" they probably told critics.

And putting Indians in a "mystical light"--as semi-fictional characters in America's Wild West mythology--yeah, that's helpful. People are really going to pay attention to modern-day Native issues when they equate Indians with fairies and will o' the wisps.

For more on the subject, see Seminole Spearchucker Is "Top Tradition" and Seminoles Compared to al Qaeda. 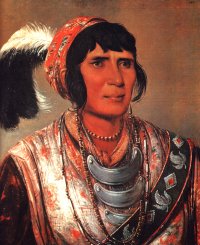