Ayn Rand's Crazy View of Native American IndiansComment:  So many stupid statements here. Let's rebut some of them:

Would she agree that an egalitarian band of Indians had the right to massacre a theocratic village of Pilgrims? If she were sincere about her beliefs...yes, she would. But I'm guessing there's no circumstance in which she'd support the brown-skinned conquest of white-skins.


Was Japan justified in bombing Pearl Harbor because we hadn't turned it into a Tokyo-style megalopolis? Could Russia retake Alaska because most of it is lying fallow? Could China drop an occupying force in Yellowstone, the Everglades, or Central Park? Why not, if development is the only standard that matters?

We could apply this belief on a personal level too. If your neighbors don't mow the lawn or take out the trash, can you take their property? How about an unused lot owned by a corporation or the city or county? How is this different from the rationale used to steal Indian lands?

Rand probably would return to the concept of legal ownership. Which means her argument about whether owners develop their property is specious. It's a smokescreen designed to hide her justification for legalized theft.

So the grande dame of libertarianism was a racist who scorned the non-white peoples of the world. No wonder followers such as Rand Paul have opposed the Civil Rights Act. Libertarians can pretend they're interested in the abstract idea of smaller government, but what they really want to do is preserve the white, Euro-American status quo.

Curious that Rand the atheist agreed with the Christians she supposedly disdained. Like her fellow neo-Nazi Bryan Fischer, she was a genocidal maniac. She didn't care that her fellow Euro-Americans conquered and killed perhaps 100 million Indians. They weren't real people to her because they were "savages."

If white people want to commit murder and genocide, they'll invent an excuse for it. As long as thugs like her are in charge, Western nations will continue to destroy indigenous peoples and cultures. That's Rand's "libertarian" message for you: Might makes right.

Below:  "Inferior people deserve to die!" 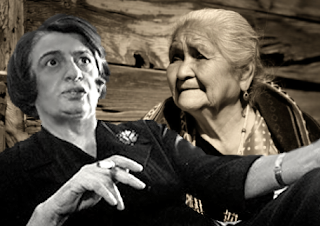